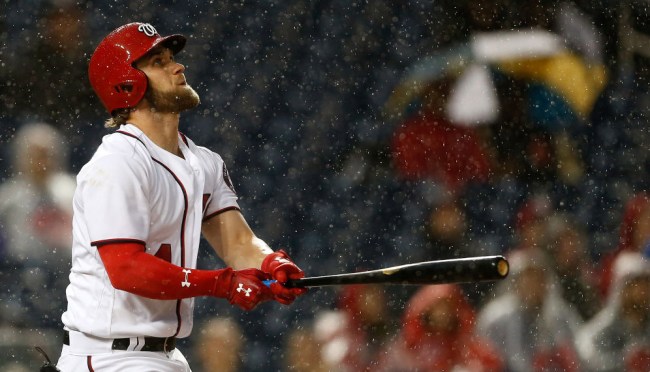 Do you even cup, Bro? That is basically the (clown) question Bryce Harper is asking the entire world by sharing these image below of one of his insane cupping sessions. Harper covers his entire back with the suction cups. Literally, his entire back is cupped.

Now, I am no cupping expert, but I thought you were supposed to use the therapy on your trouble spots; you put the cups on tight muscles to help blood flow and other shit. Let’s ask Wikipedia….

Through suction, the skin is drawn into the cup by creating a vacuum in the cup placed on the skin over the targeted area. The vacuum can be created either by the heating and subsequent cooling of the air in the cup, or via a mechanical pump. The cup is usually left in place for somewhere between five and fifteen minutes. It is believed by some to help treat pain, deep scar tissues in the muscles and connective tissue, muscle knots, and swelling; however, the efficacy of this is unproven.

Alright, so I was close. And, based on this photo, apparently Bryce Harper’s entire back is a problem area. That, or he is just trying to be the James Harrison of cupping. (Note: In case you didn’t know, James Harrison is the bad boy of acupuncture. Dude just jabs all the pins into his skin.)

This is called cupping. Bryce Harper bringing it to another level.

I’m counting 54 cups on that back. FIFTY FOUR! Oh yeah, suffice it to say Bryce Harper is the bad boy of cupping. No one cups more.