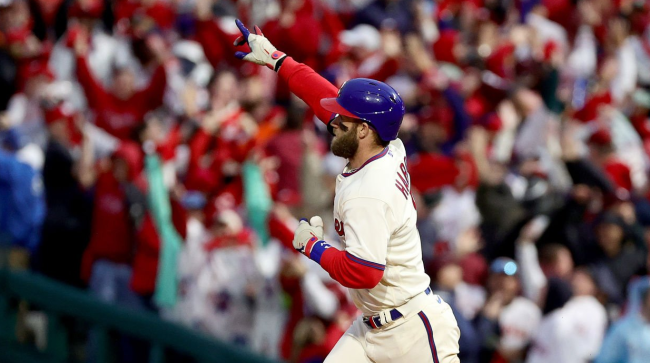 Sunday night, just before he was about to go to bat in the bottom of the eighth inning with his Phillies down 3-2, Bryce Harper pretty much called his shot.

Following a J.T. Realmuto single to put the tying run on base, Harper worked the count to 2-2 then launched a 382-foot home run that put Philadelphia into the lead – a lead they would not relinquish, sending the Phillies to their first World Series since 2009.

How is this stadium still standing pic.twitter.com/Vrhmgo6zYe

What no one watching the game on TV, their phone, their computer or in the packed stands at Citizens Bank Park knew was the six-word message Harper gave his hitting coach Kevin Long before stepping up to the dish.

“I said, ‘Let’s give them something to remember,'” Harper recalled.

That, right there, is the stuff of legends.

After the home run, even Harper couldn’t believe that he did it.

Of course, without Realmuto getting on base, Harper’s blast wouldn’t have meant as much, and he admitted it, telling him thanks.

Harper is now hitting .419 with five home runs and 11 RBI in 11 postseason games after missing a large portion of the season with a fractured hand – an injury that hasn’t allowed him to play the field during the playoffs.

Needless to say, Phillies fans certainly think Bryce Harper is well worth the 13-year, $330 million contract Philadelphia signed him to in the winter of 2018.

One Phillies fan, summing up the evening pretty much perfectly, even turned Harper’s historic home run into a version of the scene from Moneyball when Scott Hattberg hit his big bomb.

How can you not be romantic about baseball?