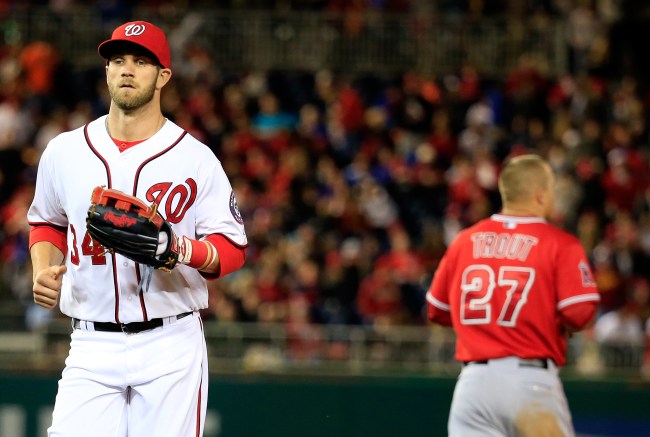 Bryce Harper is a poor in relation to the cartoonish, record-breaking 12-year, $430 million contract Mike Trout signed with the Los Angeles Angels on Tuesday. Not only is Harper’s contract $100,000,000 poorer than his industry counterparts, but his dream of the two becoming teammates in Philadelphia next summer is officially deader than disco.

Harper spoke to the media on Wednesday morning at Spectrum Field about his friend’s monstrous contract and genuinely sounded happy for him.

“I’m very excited for him. He made the best decision for him and his family. The Angels made a great decision, making him the face of their franchise for a long period of time.

“I didn’t know the contract was coming. If you’re a team and can lock up a franchise guy like that, of course you want to be able to do that. When I talked to him this offseason it was like, man, I want to get as much as I can so that you can blow me out of the water pretty much. And he did. I’m excited for him. I’m excited for Mookie (Betts) to see what he gets when he goes about it. (Aaron) Judge as well.”

As far as Trout stealing Harper’s short-lived title of ‘largest contract in North American professional sports history’ after just three weeks, Harper has a grounded view on the situation.

“I got the contract I wanted,” he said. “I got the length that I wanted. All the money and things like that, I’ve got more money than I’ll know what to do with. Once I knew Trout was going to sign, it’s inevitable. He was going to be the highest-paid player in the game in all of sports.”

It’s a relief that Harper doesn’t harbor any resentment towards Trout’s $100,000,000 richer contract. I simply cannot respect a man who has any axe to grind after inking a $330 million deal.

Live look at Bryce Harper getting the news about Mike Trout. pic.twitter.com/jHGOabEvHT