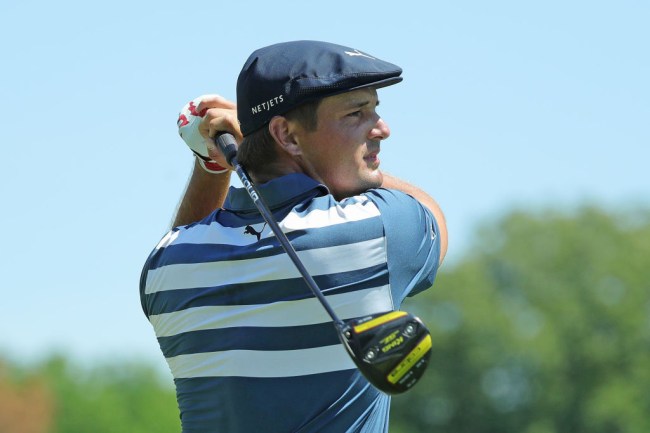 Each and every time Bryson DeChambeau tees it up, something truly wild happens, he’s become must-see TV.

A few weeks ago at the Travelers Championship, he caught everyone’s attention by nearly driving multiple Par 4’s leaving himself nothing but flip wedges into the greens of 400+ yard holes. He even managed to hit a 428-yard drive with some help from the cart path.

During the first round of the Memorial, he nearly matched that 428-yard bomb with zero help from the cart path.

DeChambeau managed to hit a 423-yard tee shot on the first hole, his 10th hole of the day, that carried 345 yards. The line he took was beyond aggressive as he took it over fairway bunkers that were 330 yards to carry. The long drive didn’t phase him, however, he didn’t even keep an eye on the ball, he knew it was good.

423-yard drive. 💪
Hits approach to six feet. 🎯
Makes the putt. 🐦@b_dechambeau gets back to even par.#QuickHits pic.twitter.com/b7DOnHR5oo

Before you point out the fact that his drive rolled out nearly 70 yards, sure, it did, but let’s not discount the fact that the guy flew a drive 345 yards in the air. Even for DeChambeau, that’s an absolute missile off the tee. He leads the Tour in average driving distance averaging 323 yards off the tee.

DeChambeau has earned a win and finished T-8 or better in his other three starts since the PGA Tour resumed its season in June.

Related: Bryson DeChambeau Awkwardly Talks About Tiger Woods’ Greatness In The Past Tense