Bubba Wallace On His Frightening 150 MPH Crash At Pocono: ‘You Literally Think, Am I Gonna Die?’ 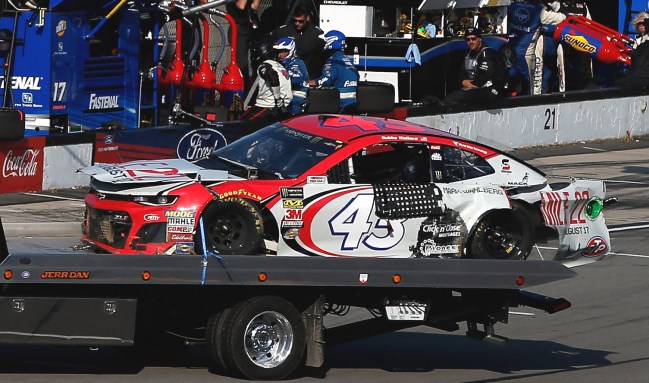 During NASCAR’s Cup Series stop at Pocono Raceway on Sunday, driver of the number 43 car, Bubba Wallace, somehow walked away from one of the more frightening crashes you’ll ever see after his brakes failed at around 150 mph.

The worst part of the crash, as it turned out, thankfully, was the fact that it took Wallace so long to actually hit the wall that he had way too much time to ponder his fate before the impact.

.@BubbaWallace climbed from the 43 car under his own power after this hard crash at @poconoraceway. pic.twitter.com/HgqEcYMb3T

After the crash, Wallace tweeted, “Scariest and hardest hit I’ve had. The reality of being helpless in that situation freaked me out. Didnt know what the outcome was gonna be. Glad it’s just a bitten cheek and banged up foot.”

Also following the race, Dale Earnhardt Jr., who was in the broadcast booth at the time of the crash, explained on his Dale Jr. Download podcast what that feeling of helplessness a driver has when he knows he is going to crash hard.

“But in that rare situation that Bubba described where something breaks and you’ve got time to think, like you’re heading toward this wall at 180 miles an hour and you’re gonna hammer that damn thing, you don’t know what the result’s gonna be. And you do think about your ability to survive it.

"Are you gonna survive? Are you gonna die?"@DaleJr opens up about what goes through the mind of a racecar driver when impact is imminent, after watching the brutal @BubbaWallace crash at @PoconoRaceway #DJD pic.twitter.com/QFAO1LtJDC

Wallace also appeared on The Glass Case of Emotion podcast this week where he too, said basically what Earnhardt said about contemplating one’s fate as you head towards the wall.

“You literally think, ‘Am I gonna die? Am I gonna get knocked out?’ Because the way I was heading for the fence was head-on straight. …

“I thought I was going to hit head-on. My facial expression, I wish you could have seen it. I told (my girlfriend) Amanda, ‘Yeah, you jumped around the corner and scared the hell out of me, and I’m like, “Oooh!”‘ This one was like petrified. I didn’t know if I was going to die or not.”