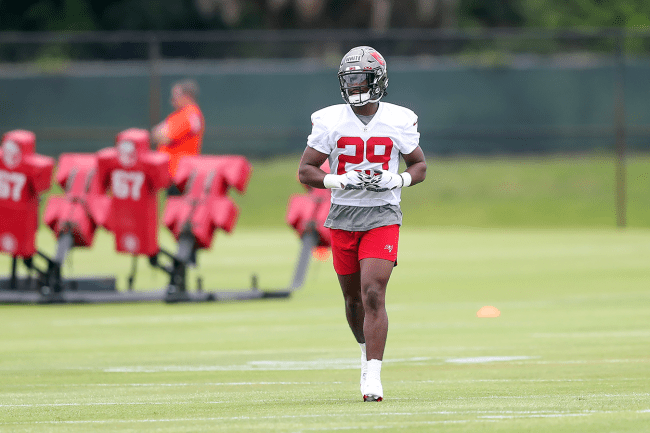 With the No. 91 overall pick in the 2022 NFL Draft, the Tampa Bay Buccaneers selected Rachaad White. The 6-foot-1, 214-pound running back out of Arizona State was the team’s third selection of the draft and has a significant upside.

As things currently stand, Leonard Fournette will be the primary back in Tampa, and both Ke’Shawn Vaughn and Giovanni Bernard will compete for carries. In addition, White will be an immediate impact player and could be used heavily in the Buccaneers’ offense as a rookie this fall.

White is impressive. He has worked really hard to get to where he is and his story is rather unique.

After totaling over 2,000 all-purpose yards as a senior in high school in Kansas City, he did not receive any significant offers. As a result, he ended up on the JUCO level before transferring to Arizona State.

White played in just four games in 2020, but averaged 10 yards per carry and had six total touchdowns. In 2021, he made a name for himself.

Over the course of his final year on the collegiate level, White led the Sun Devils with 1,006 yards rushing and finished second on the team with 456 yards receiving on 43 catches. He accounted for 16 total touchdowns and did it all in just 11 games.

Because of his dual-threat abilities as both a runner and receiver, White skyrocketed up draft boards after a strong NFL Combine performance in which he ran a 4.48-second 40-yard dash. Ultimately, he ended up going in the third round to the Bucs.

Over the weekend, Rachaad White received a comparison from a reporter that he was not interested in and quickly demanded respect on his name.

Didn’t anyone learn their lesson with Ronald Jones? The absolute delusion. https://t.co/mDkvsKdeMI

Clearly, White is confident in his abilities and is out to prove the doubters wrong. He believes that he is different from the guys that have come before him.

Schill ended up clearing the air with White and the latter was quick to show his appreciation for the former.

If White is coming in with this big of a chip on his shoulder already, it could be bad news for opposing defenses trying to bring him down.