Worst Case Scenario For Sportsbooks This Season? Tom Brady And The Bucs Winning The Super Bowl 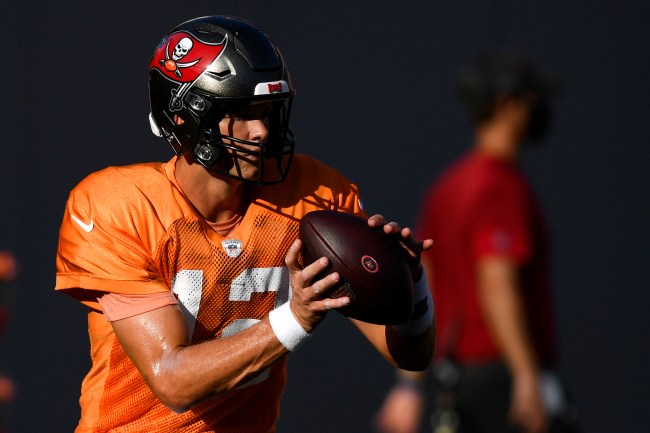 This NFL Sunday I have a lot to be optimistic about. As a lifelong Tampa Bay Buccaneers fan, I’ve experienced the ultimate highs and lows. Winning Super Bowl XXXVII was as good as it gets but ten years later the Bucs went 4-12-0 and the season after that they went 2-14-0. Then my Bucs drafted Jameis Winston from my alma mater FSU. I had the college QB who won a Heisman and National Championship for my college headed to the pro team I support. How could that ever go wrong??? Ooooof. What a run that was.

Now the Buccaneers enter the 2020 NFL season as the most hyped team. Due to some rip in the space-time continuum, the Bucs were able to land the GOAT in Tom Brady who brought in Rob Gronkowski. They added LeSean McCoy and Leonard Fournette at RB. There’s A LOT of reason to be optimistic this season but I’m still a natural pessimist. I predict my Bucs will win the Wild Card and fizzle out before the NFC Championship.

Before landing Brady, the Tampa Bay Buccaneers were around 40-to-1 to win the Super Bowl. Headed into the first Sunday of NFL football this season the Bucs are 10-to-1 to win it all. This could lead to a nightmare scenario for some sportsbooks, a seven-figure loss.

Here’s what Boston’s CBS Local has to say about this potential nightmare scenario for sportsbooks:

A story on ESPN explained that while the Kansas City Chiefs remain the betting favorites to win Super Bowl LV, it is the team in Tampa that is getting the most action from bettors. As such, with the Bucs getting roughly 10-to-1 odds, sportsbooks will be in a precarious position if Brady, Rob Gronkowski, Mike Evans and Co. lead Tampa to glory this season.

“FanDuel said its worst-case scenario, as of now, would be Tampa Bay winning the Super Bowl,” ESPN’s David Purdum wrote. “The sportsbook is facing a seven-figure liability on the Buccaneers to start the season. Entering the week at DraftKings, the Buccaneers had attracted twice as much money from bettors as had been bet on the Chiefs and three times as much money as any other team.”

The stress for the Super Bowl will hang over the sportsbooks’ head all season, and the week-to-week bets pouring in for Brady’s new team figure to present some problems, too.

Do I think the Buccaneers will win the Super Bowl this season? I really, really don’t. Did that stop me from placing a decent-sized bet on the Bucs because I was receiving favorable odds at the end of last season? No, it did not. I do this every year. For me, it’s like buying a lottery ticket because there’s always a chance. This year the universe threw me a bone.

If you are looking for some betting tips to make the most of this NFL season then you 100% need to check out this article from our Sports Gambling expert John Supi who has been killing it for weeks with his NBA/NHL/MLB picks. Here are his 6 NFL Betting Tips To Make Money This Season along with his breakdown of Who To Start – And Who To Sit – In Week 1 of Fantasy Football.