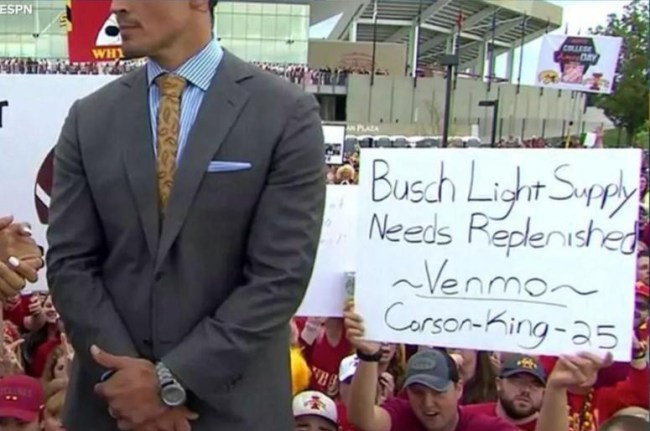 There are certain states around the country that swear by a particular beer—Texans love their Lone Star, Wisconsinites swear by Spotted Cow, and people in Pennsylvania will never stop talking about Yuengling.

The same can be said for Iowa, which cherishes one beer above all others: Busch Light.

A couple of weeks ago, a guy named Carson King rolled up to College GameDay with a sign in an attempt to get people to contribute to his Venmo in order to get his hands on some of that sweet, sweet nectar and was blown away by the number of strangers who sent him money to support the cause.

King found himself fluuuuush with caaaaaash, and while he could have kept the hundreds of dollars he received for himself, he announced he’d be purchasing a single case and donating the rest to charity.

The former Iowa State student soon found himself flooded with donations to benefit the University of Iowa’s children’s hospital and the story would eventually come to the attention of both Busch Light and Venmo, which pledged to match the money he received.

On Sunday, the fund surpassed the million-dollar mark, and as of this writing, the total sum was over $1.1 million.

Over 1.13 Million Dollars in total contributions for @UIchildrens after @BuschBeer and @venmo match! Do you think we can hit 2 Million by the end of the month? 🤔 #ForTheKids

Now, one ice cream shop in Iowa is doing what it can to contribute by selling Busch Light ice cream because why the hell not?

All sales of the Busch Light-flavored soft serve will go towards Carson King's fundraiser. 🍦🍻 https://t.co/QInkTTTsZi

According to The Des Moines Register, Goldie’s Ice Cream Shoppe whipped up some soft serve made with (non-alcoholic) Busch Light and will be selling it until next Monday with all proceeds going to benefit King’s fundraiser.

I have no idea if it’s good, but with that said, it’s for a good cause so if you happen to find yourself in Prairie City for some reason it might be worth stopping by to see for yourself.