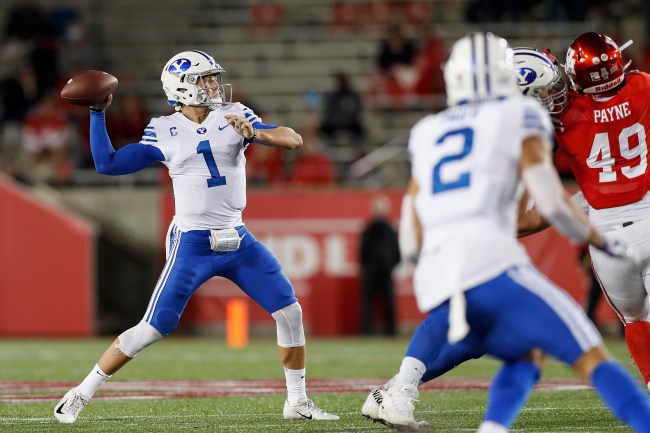 If you’re not a college football fan, you probably haven’t heard of BYU quarterback Zach Wilson, but if he keeps playing like he has in the first eight games of the season, you will know his name. The Cougars are ranked No. 9 in the country, the school’s highest ranking since 1996, and blew the doors off of the No. 21 Boise State Broncos 51-17 last night to remain undefeated. It was a blowout in Idaho and the home team was down to its fourth-string quarterback, but it doesn’t take away from the performance of Wilson and his offense.

NO. 9 BYU DOMINANT IN 51-17 WIN OVER NO. 21 BOISE STATE#BYUFOOTBALL #GoCougs pic.twitter.com/UdflCtUkwy

To catch you up, the 6-foot-3, 210-pound babyfaced junior has completed 75 percent of his 220 pass attempts for 2,511 yards and 21 touchdowns with only two interceptions. If those numbers aren’t enough to get your attention, Wilson has run the ball 50 times for an average of 2.8 yards per carry and eight touchdowns. He’s mobile, elusive, and continues to throw ropes. Here he is dropping a dime in a bucket last week against Western Kentucky:

What a ball by Zach Wilson #BYU pic.twitter.com/O8cm6euf6Y

Watch this throw on the move against UTSA:

This is a legit throw by Zach Wilson pic.twitter.com/NaXrsTHyvd

And how about a jump ball to the outside for good measure:

Buy BYU down to -3 and ADD IT TO YOUR CARD! It’s Zach Wilson SZN 😎 pic.twitter.com/VrfhTA2wg5

The Utah native is a legit player on a legit offense. BYU has historically been a pass-friendly, gun-slinging system with the likes of Jim McMahon, Steve Young, Steve Sarkisian and Heisman Trophy winner Ty Detmer having paved the way. Offensive coordinator Jeff Grimes took over a struggling offense in 2018 and has done an impressive job turning around the production with a fast, creative scheme.

The play-calling is good, and having Wilson makes it that much better. One of the best drives of the college football season thus far came on the first BYU possession of the second half last night. On the third play of the drive, the man they call ‘Mormon Manziel’ rolled to his right and put a back-shoulder throw down the sideline where only his receiver could make the play. Literally. It was a tough catch but it wouldn’t have been possible if Wilson didn’t fit it in such an incredibly tight window.

He completed the pass for 38 yards and did it again on the next play, this time going back across his body and finding Mitt Romney’s distant relative Gunner Romney between two defenders. If there was going to be a knock on Wilson during this drive, a really nit-picky critic could say the ball is under thrown. However, if Romney hadn’t come back to the ball and leaped, it probably would have dropped right in his arms.

To finish off the drive, Wilson flicked his wrist with a slight Mahomes-esque sidearm for a touchdown.

I, and many others, have been on the Wilson hype train since last season, but his dazzling play this season is turning heads in NFL front offices and gaining the recognition he deserves. The Cougars are forced to play a significantly modified schedule as an independent program during the COVID-19 pandemic, and will have two games remaining against North Alabama and San Diego State on Nov. 21 and Dec. 12. They could potentially put a few more games on the schedule in the coming weeks, but there are few opponents that could be added this late that would foreseeably pose a challenge. If the trend continues, BYU could be undefeated at 10-0 when all is said and done, raising the question of whether it deserves an opportunity to play in the College Football Playoff.

It is unlikely, but possible. It’s the Heisman Trophy race where things could become more realistic. The award is given to the best football player in college football and Wilson has made his case thus far.

To compare, he has out-thrown Clemson’s Trevor Lawrence by 678 yards and four touchdowns with less than 30 more pass attempts. He has also doubled Lawrence’s numbers on the ground. BYU’s signal-caller is also miles ahead of Ohio State’s Justin Fields (who has played only two games) and has a 400 passing yard lead over Alabama’s pocket passer Mac Jones.

Wilson may not get the respect he deserves on a team like BYU, but Detmer won the Heisman in 1990 and the school deserves to have another finalist (at minimum) this season. Here’s another NFL-caliber throw in case you’re not convinced:

It’s time to get the Wilson for Heisman campaign rolling.