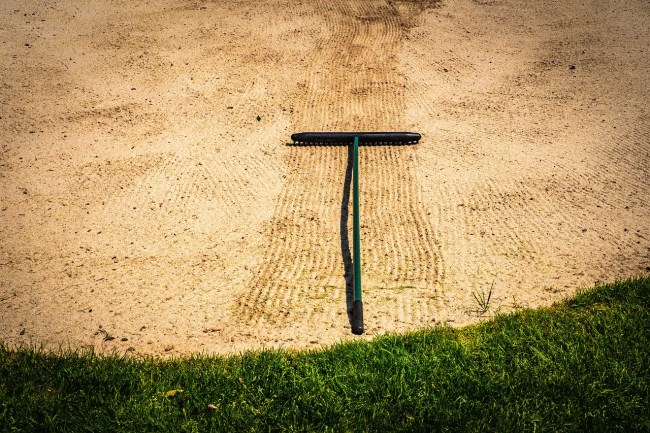 The 120th U.S. Amateur is currently being played at Bandon Dunes in Oregon and while each and every year the top amateur event in the country has its fair share of drama, this year’s tournament is really delivering on that front.

To begin the match-play portion of the tournament, there was an 18-player for the final three spots in the 64-man bracket. While large playoffs are nothing new at the U.S. Amateur, what happened during Thursday’s action during the Round of 16 was certainly unique.

The No. 40 seeded player Segundo Oliva Pinto and the No. 41 seeded player Tyler Strafaci were tied on the 18th hole. Oliva Pinto was getting set to hit his fourth shot from a greenside bunker on the Par 5 when cameras caught his caddie, a local named Brant Brewer, jump in the bunker. Standing in the bunker is fine, but reaching down and touching the sand? Not so much.

Strafaci’s caddie, his dad, witnessed Brewer reach down and touch the sand. Golf Channel clearly caught the incident on camera as you can see below, and rules officials determined Brewer to have touched the sand, a violation of Rule 12.2b, which states a player or caddie must not “deliberately touch sand in the bunker with a hand, club, rake or other object to test the condition of the sand to learn information for the next stroke.”

In match play this penalty results in a loss of hole, so there you have it. Oliva Pinto got bounced from the Round of 16 in the U.S. Amateur because for some reason his caddie decided to play in the sand.

It all came down to the 18th hole.

And then this happened.

The outcome? A 1 up win for Tyler Strafaci. #USAmateur pic.twitter.com/JFJcoSKfFQ

According to Golf Channel, Brewer offered no explanation to Oliva Pinto for his actions.