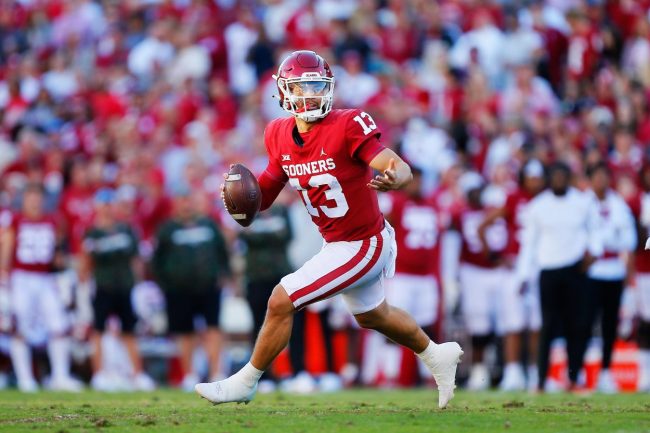 Two days after Oklahoma quarterback Caleb Williams entered the transfer portal, an unexpected suitor has entered the conversation. Williams, who would be welcomed by nearly every program in college football, is being recruited to the Mid-American Conference.

It has been a crazy journey for the former five-star quarterback prospect. Just over one year ago, Williams committed to Oklahoma.

He was expected to sit behind Spencer Rattler in 2021 and that is exactly what happened at first. However, six games into the season, Williams was tapped to lead the largest comeback in Red River Shootout history and did just that.

From that point forward, Rattler was expected to transfer and Williams was named the starter for the Sooners. All signs pointed toward it being Williams’ team until he chose to declare for the NFL Draft.

And then things took an unexpected turn.

Immediately after the conclusion of the regular season, head coach Lincoln Riley left for USC. Williams chose to finish out the year and play in the Alamo Bowl under interim Bob Stoops, while Clemson defensive coordinator Brent Venables was hired to take over at Oklahoma.

Venables, when asked whether Williams was going to stay in Norman, was hopeful. It just didn’t work out that way.

On January 3rd, Williams announced that he was entering the transfer portal. A return to Oklahoma was not ruled out, but his recruitment is officially an expensive bidding war. The Sooners then went on to land Dillon Gabriel from the portal, all-but moving on from Williams.

Among the teams that are in the mix to land Williams, USC and Lincoln Riley received a lot of chatter. A reunion would make sense.

However, Georgia appears to be heavily involved, and both Ole Miss and UCLA are reportedly in the discussion. The Rebels, Lane Kiffin included, have reportedly spoken with Williams and an effort is being made to bring him to Oxford.

While it seems like Georgia has a leg up in the early stages, USC and Ole Miss are also in the mix. Williams’ father said that his son’s decision will come down to whatever school can prepare him for the next level, but lucrative deals for NIL will surely play a big factor.

With that in mind, a new suitor has entered the chat. Eastern Michigan.

On the afternoon that Williams’ name officially appeared in the transfer portal, former NFL quarterback Charlie Batch made his pitch via Twitter. Batch, who played 14 years in the league, played his college football with the Eagles.

He made an offer to Williams on Tuesday.

Hey @CALEBcsw, have you considered Eastern Michigan, @EMUFB? If not, you SHOULD. GameAbove Capital is prepared to pay you ONE MILLION DOLLARS for one year! Are you ready be an EAGLE?@espn @CBSSportsNet @CBSSports @NBCSports @FOXSports @barstoolsports @MACSports @FS1

GameAbove Capital is an impact fund for environmental and sustainability solutions. If Williams is to enroll at Eastern Michigan, GameAbove is prepared to offer him a $1 million contract for NIL for just one year.

The number that has been floated around in regard to Williams’ recruitment is about $3 million.

Is EMU offering him $1 million a year for his remaining three years? Are they matching the alleged numbers from Georgia, Ole Miss, USC, and others?

Regardless of what the NIL deal would look like, Williams is not going to consider Eastern Michigan. It would be pretty monumental if he shocked the world, but it’s just not going to happen.

Credit, however, to Batch and to the Eagles for shooting their shot. If anything, it makes it clear that they have money and are willing to spend it for good players. That could benefit them moving forward when recruiting against programs of equal caliber.