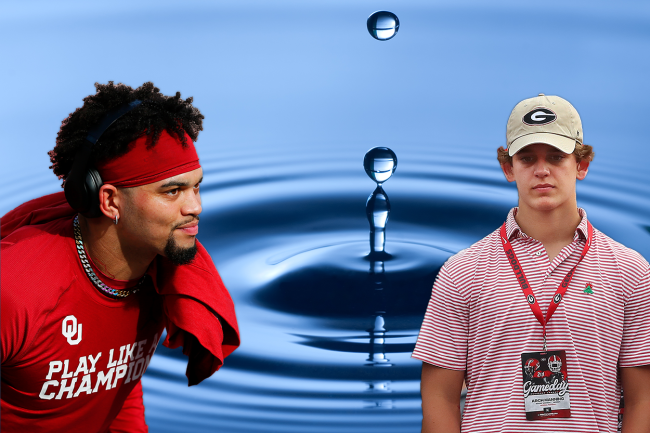 Two days after announcing that he is set to explore all options for his future, Caleb Williams’ name officially appeared in the transfer portal on Wednesday. Depending on where he ends up, Williams’ commitment could set off a massive chain of reactions.

As of right now, four prominent schools are reportedly in the mix for Williams— Ole Miss, USC and Georgia. UCLA has also had interest and another unlikely suitor has offered him $1 million in deals for NIL.

However, the Rebels, Trojans and Bulldogs appear to be in the lead. Lane Kiffin has spoken with Williams at least once, Lincoln Riley recruited Williams to Norman, and playing for a national championship team is always enticing.

Regardless of where Williams ends up, that school is going to pay out a small fortune in deals for NIL. The rumored price tag hovers around half of a million.

If Williams ends up in Los Angeles or Athens, it will almost certainly set off a butterfly effect that sends shockwaves across the country.

Should the former five-star recruit commit to play for USC, it would likely lead former four-star recruit Jaxson Dart to transfer. Dart started some in 2021 after Kedon Slovis got injured and is set to be the incumbent starter next year, with a lot of hope around his potential.

Should Williams commit to play for Georgia, it could cause two massive moves to follow.

For starters, five-star quarterback Brock Vandagriff is waiting in the wings. The in-state, No. 4 overall quarterback prospect committed to UGA as a part of the Class of 2021 and sat behind Stetson Bennett and JT Daniels this fall. His hope is surely to take over when Bennett and Daniels move on.

If Williams is in, Vandagriff likely would be out.

In addition, it could cause a huge shake-up in Arch Manning’s recruitment.

As of right now, all signs point toward Manning’s potential destinations including Georgia, Texas, Ole Miss, Clemson, LSU and Alabama. It is very unlikely to be one of the last two.

That leaves the Bulldogs, Rebels, Longhorns and Tigers.

If Williams signs with UGA, he will have two years of eligibility left in Athens. Should he stay there for both years as the starter, it would require Manning to sit his freshman year.

Per reports, while it is not necessarily a deal-breaker based on his comments about Quinn Ewers, Manning would reportedly prefer to start in Year 1. Thus, Williams’ commitment could be a big factor in the future of Eli and Peyton’s nephew, Archie’s grandson, and Cooper’s son.

One splash can send ripples across the whole pond.