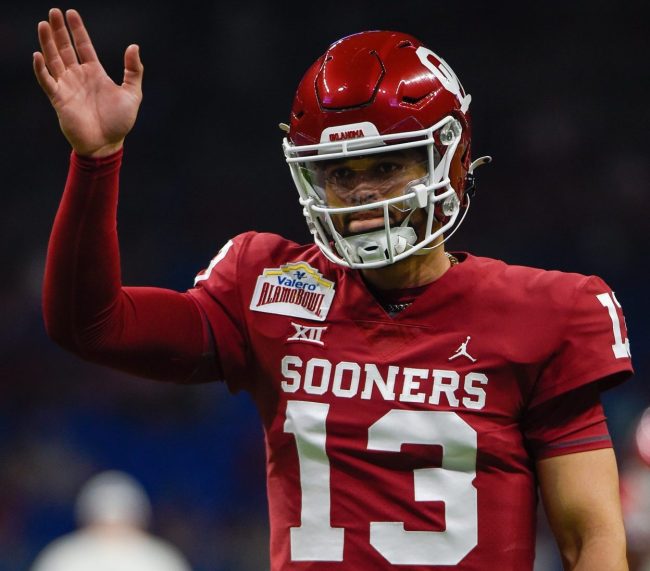 When former Oklahoma head football coach Lincoln Riley left for USC, it was expected that quarterback Caleb Williams would follow. He officially entered the transfer portal on Monday, which is the first step toward putting that potential move into place.

Williams, a true freshman, former five-star recruit, took over the starting job in Norman midway through the season. He chose to finish out his first year with the Sooners and threw for three touchdowns in the Alamo Bowl last week.

Now, after hitting the portal, Williams is set to transfer. Because of the NCAA’s new rules on Name, Image and Likeness, which were not in place when he was being recruited in high school, the current recruiting process is set to become a very expensive bidding war.

In his announcement, Williams did not rule out a return to Oklahoma, and USC remains the favorite. However, recent events have made things very interesting.

On Monday night, shortly after Williams entered the portal, former UCF quarterback Dillon Gabriel announced that he is transferring to Oklahoma. Gabriel, who led the nation in passing yards per game in 2020, is set to reunite with former offensive coordinator Jeff Lebby.

In almost every situation, that rules out Williams going back to the Sooners. It also complicates the current quarterback climate.

Prior to his Oklahoma commitment, Gabriel had committed to UCLA. That, obviously, is no longer the case.

As a result, Williams’ recruitment has received a new twist.

According to 247Sports’ national recruiting editor Brandon Huffman, the Bruins are very interested in Williams. UCLA reportedly reached out to his camp immediately after he entered the portal.

However, there is another caveat. Head coach Chip Kelly already has a quarterback on the roster.

Four-year starter Dorian Thompson-Robinson is currently still with the program. He was originally expected to enter the transfer portal or declare for the NFL Draft, especially after Gabriel’s commitment, but that expectation is now lesser.

Per 247Sports’ BruinReportOnline, DTR could opt to return for his senior season.

That, of course, would deter Williams from going to Westwood. Or, it is possible that he could commit to UCLA anyway like Gabriel did, which would potentially force DTR’s hand.

Should the Bruins not get Williams, their crosstown rivals are still considered to be in the lead. Thus, considering the fact that this transfer recruitment process will include a lucrative promise for NIL payout, perhaps the UCLA smoke was planted by someone in Williams’ camp to try and increase the payment from USC.

Riley and the Trojans would not want to lose his former recruit and starting quarterback to their most hated rival. It could be a leveraging ploy.

Other schools that have received some buzz are Miami, Auburn, LSU, Georgia, Ole Miss and Penn State. Regardless of where he ends up, Williams is about to cash-in.