Caleb Williams Shares Reasons Why He Chose To Transfer To USC 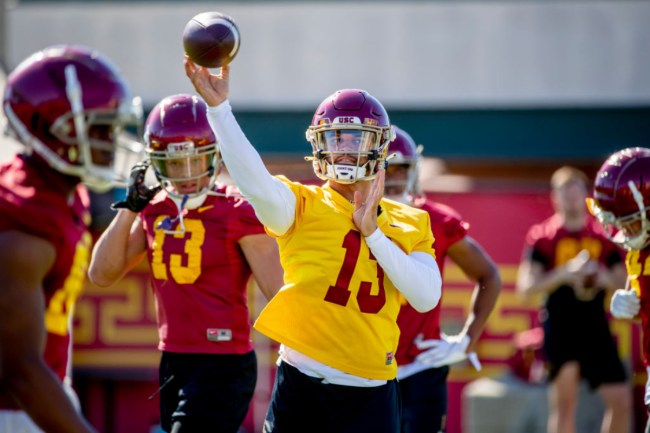 As soon as Lincoln Riley accepted the head coaching job at USC everyone assumed Caleb Williams would follow him to the West Coast. While Williams took his time in officially making the move to Los Angeles, that’s exactly what happened as he’s now set to be QB1 for the Trojans this season.

While Williams obviously has a strong relationship with Riley, it’s worth noting that he’s from Washington, D.C. Making that leap to Norman, Oklahoma was one thing, but moving out West is another big-time step.

Williams recently joined the ‘Trojans Live‘ podcast and shared the reasons why chose to transfer to USC. Spoiler alert: he thinks Riley is a magician when it comes to play calling.

“And you go out there on game day and you drop back and it’s everything he — all the film you watched and everything that we’ve repped in practice and all of that. I don’t know how he does it, but it’s pretty magical.”

Caleb Williams Is A Part Of The Lincoln Riley Family

It’s not all about x’s and o’s when it comes to Williams’ respect for Riley, he also appreciates the family aspect of everything.

“I enjoy the family aspect of it, as everybody saw probably is we were over his house yesterday for Easter — I mean, my family is 3,000 miles away in Washington, D.C,” Williams explained.

“So, obviously, didn’t get to see them ’cause they didn’t come out for Easter. But I’m very close to his family. His daughters love me. Always go over and play with them after practice and things like that. And, obviously, coach Riley, we have a good connection. I mean, we talk all the time.”

Williams and Riley will both be looking to bring a spark to USC football, something it has been missing for a handful of years now.