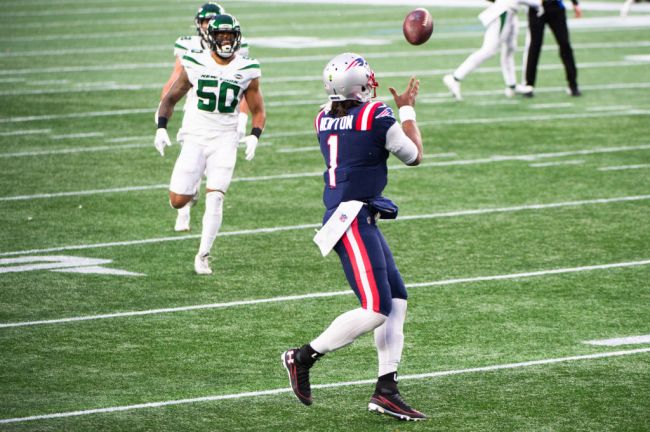 The New England Patriots do not plan to retain starting quarterback Cam Newton for the 2021 season, but that didn’t stop him from going out with a bang. Late in the third quarter on Sunday, head coach Bill Belichick dialed up a trick play to catch the New York Jets off-guard. Newton handed the ball off to his running back and slipped out into the flat, while wide receiver Jakobi Meyers came around to take a pitch on the reverse. Meyers set his feet and threw the ball back to Newton for the 19-yard touchdown. It was the first time that a quarterback caught a touchdown in the team’s history.

The trick play was Meyers’ second touchdown throw on two pass attempts this season. To make the storyline even more interesting, Newton used to coach him at the position when he was in high school. Meyers was the signal-caller at Arabia Mountain High School in Georgia and signed to play quarterback at North Carolina State. He eventually made the switch to the outside upon arriving in Raleigh and was signed by the Patriots as an undrafted free agent in 2019.

Through the Cam Newton Foundation, Newton coaches high school football players in Georgia and hosts 7-on-7 tournaments. One of the players to come through the camp was Meyers. When the 31-year-old quarterback arrived in Foxborough during the offseason, he approached his former student of the game and showed him a picture of the two of them together.

The world came full-circle for Newton’s final game with New England and he went out with a 28-14 win. Meyers finished the season with 53 catches for 661 yards.