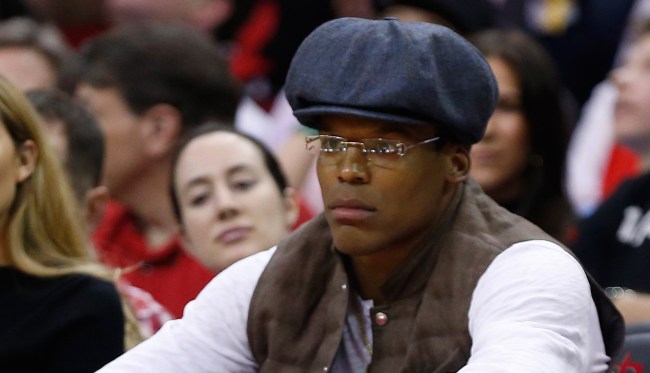 On Wednesday night’s Late Late Show with James Corden show, Carolina Panthers quarterback Cam Newton revealed that he’s taking the month off from “climaxing.” And yes, it’s exactly what you think it means.

Why Cam Newton was on James Corden’s show in the middle of the night to begin with, I have no idea, nor do I care to find out. All I know is that there is zero percent chance that Newton told this story for any other reason than to draw attention to himself.

During Newton’s appearance on the show, Corden asked Cam to explain why there are flowers on his social media.

Newton’s response went to a place certainly no one could have ever seen coming.

Cam explained that every month of 2019 he is doing something to challenge himself.

In January, Cam swore off fantasy leagues and betting of any kind. In February, Newton went full-blown vegan. Then in March, he explained, “I’m giving, I hope this is an adult crowd, it looks like it is, no climax.”

After Corden dropped a “Shut the front door” on the proceedings, Newton continued, “I’m going through a transition right now.”

That’s when David Boreanaz interrupted with a very valid point, “You should have at least done it in February. You got 28 days in February… f*ck!”

Several sexual innuendos later, Newton explained that he is doing these things because he thinks it will make his mind stronger.

Cam Newton in a week pic.twitter.com/GKLQ5n7gVo

Check out the entire segment below…

Cam Newton isn't going to climax for one month?! April Fool's Day will be messy in whatever room he'll be in! @Panthers @StephenCurry30 @nfl @latelateshow

That’s crazy! I was just wondering whether Cam Newton was gonna nut sometime in March or not https://t.co/s8F8G2wPAx

Cam Newton walking into his house on April 1st. pic.twitter.com/YmGBrzhnMe