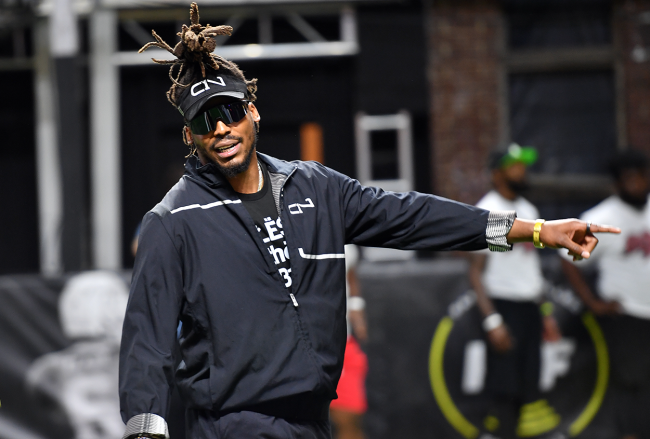 Cam Newton is currently out of the NFL, but that isn’t stopping him from chucking bombs. And this time he’s doing it underhand.

Earlier this spring, the former No. 1 overall pick partnered with Overtime to create a new 7-on-7 league. It will cater to high school prospects who are looking to compete at the highest level while protecting college eligibility.

The OT7 league will feature up to 24 teams playing eight games each with a playoff round to determine a champion. The games are played on 40-yard-line segments of an NFL field. All expenses, outside of equipment costs, will be paid for, but the players will not be compensated so that they can go on to play in college.

Over the weekend, Newton took the field at an OT7 event. He even got in on the action and blew some minds in the process.

The 11-year NFL veteran threw a football 50 yards with a perfect spiral. That may not sound particularly impressive, because it’s not, but Newton did so UNDERHAND.

The video, which went viral almost instantly, was called into question. While the caption says 50 yards, some football fans were skeptical about the distance, claiming that it looked more like 35/40 yards. Either way, it was on a frozen rope and rather impressive.

Of course, the internet did have jokes about Newton’s arm.

What about the accuracy?

Its too bad he didnt throw it underhand that whole season

With more accuracy than when he throws it overhand.

People that never threw a football: “I can do that”

Let’s see him throw 50 yards and hit a receiver running towards the end zone. Never seen that from Cam since those early Panthers days lol

Newton continues to wait on an NFL opportunity, but in the meantime it looks like he’s having plenty of fun doing his thing.