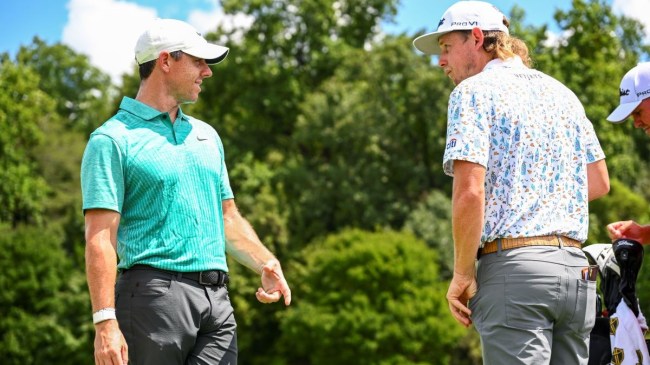 When Cam Smith departed from the PGA Tour to join the Saudi-backed LIV Golf Series, he became perhaps the biggest loss yet for the PGA Tour.

Sure, the 2022 British Open champ doesn’t yet have the name brand of others such as Phil Mickelson, Brooks Koepka, Dustin Johnson or Bryson Dechambeau, but Smith is at the peak of his golfing powers. He’s currently ranked third in the Official World Golf Rankings. At the time when he left, Smith was ranked second in the world.

So it was quite the loss for the PGA Tour at a time when it felt like players were defecting every day. But the Tour, and its top players, tried to keep Smith in the fold. That includes a conversation with top-ranked Rory McIlroy. Smith revealed more about that discussion in a recent interview.

Smith spoke with Sydney Morning Herald recently about his relationship with McIlroy, whom he narrowly beat to win his first major.

“I’ve always had respect for Rory and I’ve liked what he says on the golf course,” Smith said.

He then revealed a conversation the two had following the British Open, which involved McIroy subtly lobbying Smith to stay on the PGA Tour.

“There were maybe a couple of little jabs in there,” he said. He was happy I played well and it was a good tournament. Then we talked about the PGA Tour and LIV. There was a bunch of stuff he wanted me to know before I made my decision. I wouldn’t say he tried to directly talk me out of it, but he definitely wanted me to stay.”

Ultimately, McIlroy was unsuccessful. But you’ve got to give him credit for trying. Smith is one of the golf world’s brightest young stars and was a massive get the for the upstart new league.