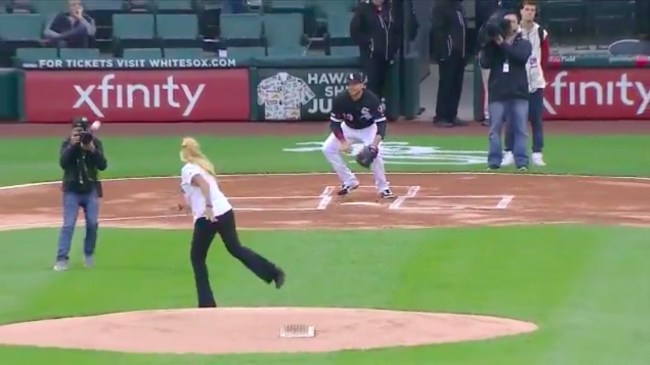 Back in 2014, Queens native 50 Cent was given the honor of throwing out the ceremonial pitch at a New York Mets game, where the rapper took to the mound, stared down the catcher, and proceeded to deliver one of the worst throws you’ll ever see.

Mr. Cent would eventually blame his nerves for the errant throw, which is probably the worst first pitch in the history of first pitches despite the best efforts of Snoop Dogg.

Of course, celebrities aren’t the only ones capable of kicking off a game in disastrous fashion and one could argue a certain Red Sox fan might actually have a stake to the claim of Worst First Pitch Ever after plunking an unsuspecting cameraman in the nuts a couple of years ago.

However, we were treated to a new contender on Tuesday night thanks to a woman at a Chicago White Sox game who delivered an impressively errant throw that also managed to find a camera guy.

At least that one hit him above the waist.

Darren Georgia—the man behind the camera—shared an update after getting plunked and revealed he and his equipment had survived the incident unscathed.

Happy to report that both myself and the camera are okay 👌📸 https://t.co/Pu04xYY7Z8

Georgia spoke with The Athletic after he was hit and said he might have actually played a role in the disastrous delivery, saying:

It’s good to know the only thing that ended up bruised was the woman’s ego.