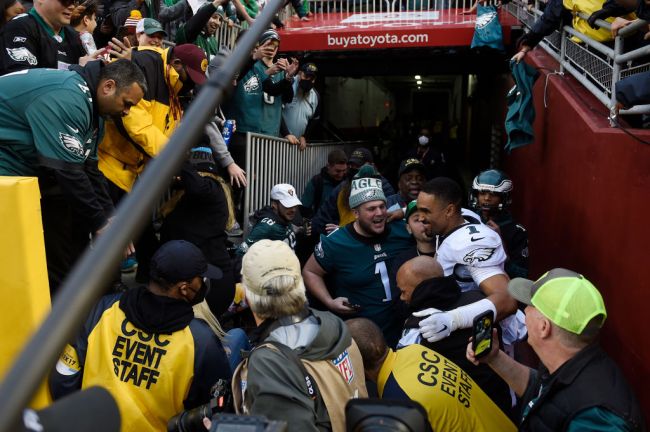 I’m a New York Jets fan, so the pain I feel rooting for a moribund NFL franchise runs deep and true. But, at least, the Jets aren’t a complete disaster off-the-field. Metlife Stadium is decent and, other than his political affiliations, owner Woody Johnson — for as incompetent as he may be — is relatively controversy-free.

From the on-field product to the off-the-field headlines, the Washington Football Team is seemingly always headed in the wrong direction. That backward momentum seems to also apply to the stadium they call home, FedEx Field, as the structure itself has made headlines this season, beginning with poop water leaking on fans earlier in the season and ending with the railing collapse following the game against the Philadelphia Eagles.

Naturally, the story hasn’t simply begun and ended with the railing collapsing and almost severely injuring Eagles QB Jalen Hurts, as new footage from the incident apparently shows an NFL cameraman kicking at one of the fallen fans.

This cameraman embodies our energy all year. You’re gonna fall on me? One kick for you pic.twitter.com/V87I2wC6bg

FedEx Field, folks: the epitome and nexus of professionalism.

The Washington Football team — who are set to announce their new name and logo on February 2 — will conclude their 2021 season with a trip to the equally awful New York Giants. As for the Eagles, who have already clinched a playoff berth, they will host the Dallas Cowboys in Philly.