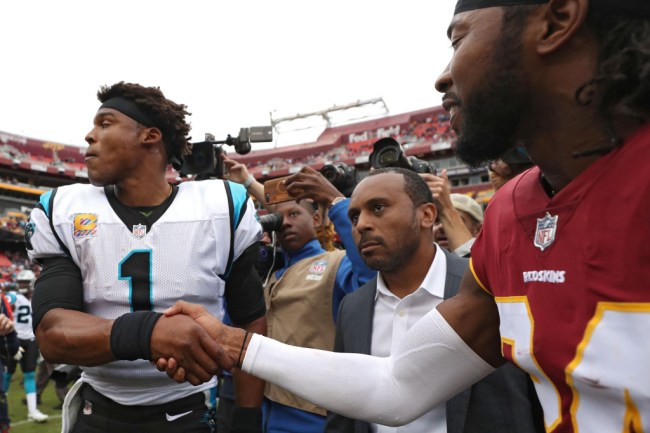 Josh Norman ended his 19-game interception-less streak on Sunday by picking off former teammate Cam Newton on a third-and-long play early in the second quarter. Norman, who also forced a fumble, needed a monster game after getting benched for the first series of the second half during last week’s Monday Night Football drubbing to the New Orleans Saints, with the media calling into question his commitment and reliability.

The 30-year-old’s former teammate DeAngelo Hall went as far to say that Norman was more concerned with being a celebrity than playing football.

Suffice it to say, a big game against his former team was exactly what Norman needed after the media taking him behind the woodshed and blowing a coverage that resulted in Drew Brees’ record-setting touchdown pass.

“It’s fitting that we break that little streak against the team that I was with,” Norman said. “I guess we’ve got a flair for the dramatic, somehow. I wouldn’t let God’s angels …. take it from me if they were out there.”

This W has to feel extra special for Norman, considering it came against Cam Newton and the team that rescinded his franchise tag. Newton and Norman aren’t what you’d consider to be friends. The two needed to be separated at training camp in 2015 after engaging in a physical altercation and Newton talks about his former teammate like someone he can live without.

Josh Norman can't play football without getting mad! I learned his name because of a fight with Cam Newton Before the 2015 season pic.twitter.com/eipvJCzs8E

“He’s loud,” a grinning Newton said of Norman. “Then he gets into your personal bubble, like when you’re talking face to face, and I don’t like that. Every people’s got a bubble — Josh wants to get all into your bubble and talk, but that’s just him.” [h/t Charlotte Observer]

After a trash-talk filled game between the two, the resentment oozed out of Cam Newton, who failed to come through on the potential game-winning drive to fall to 3-2. Newton couldn’t even get himself to look his former teammate in the eye.