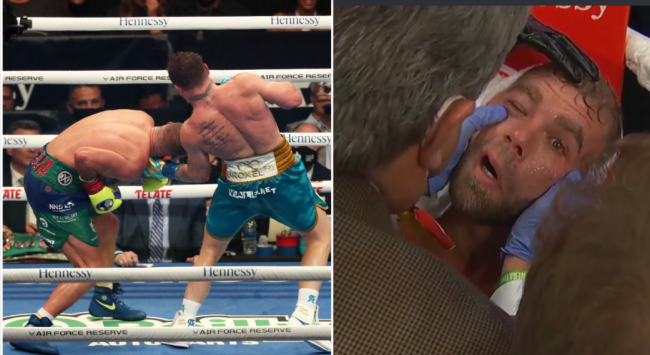 While Saunders looked good for much of the fight and competed with Canelo, the Mexican boxer was able to end the fight after hitting the Brit with a nasty uppercut at the end of the 8th round.

The uppercut that secured Canelo the victory 💥

Saunders’ corner stopped the fight due to the fact that Billy Joe couldn’t open his right eye.

Billy Joe needs a steak on that eye. Fight is over. Canelo with the TKO pic.twitter.com/vBcFx393ry

Billy Joe Saunders' eye was completely closed after that last round beatdown by Canelo #alv pic.twitter.com/ElVpZ0wySK

According to Saunders’ manager Eddie Hearn, Saunders busted his eye socket as a result of the Canelo uppercut that ended the fight.

According to Eddie Hearn, Billy Joe Saunders busted his eye socket and his trainer refused to let him go back out. pic.twitter.com/72eH1e4tCC