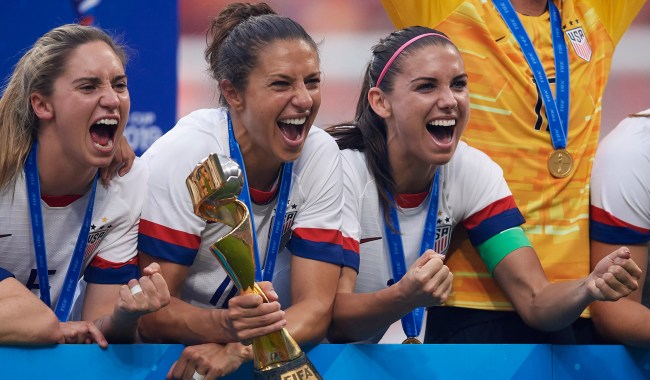 Carli Lloyd went from scoring a hat-trick in the 2015 World Cup final for the U.S. Women’s National Team to being a reserve in the squad for the 2019 World Cup.

She went from the go-to player on the team to a substitute, albeit a very effective one, but that entire process seemed to be difficult for the 37-year-old.

Lloyd was on ESPN’s Laughter Permitted podcast and reflected on the 2019 World Cup run saying ‘it was the worst time of my life’ before going into more detail.

“It affected my relationship with my husband, with friends,” Lloyd said. “It really was rock bottom of my entire career. But somehow, you see light at the end of the tunnel, and I can honestly say I’m having more fun now playing than I ever have in my career. I think I just learned a lot throughout it.”

“There’s no denying it,” Lloyd told ESPN. “I deserved to be on that field that whole World Cup, but I wasn’t. And I think I’ve grown as a person, as a player. It sucked. It absolutely sucked.”

The USWNT decided to play a different formation under then head coach Jill Ellis which made it that more difficult for Lloyd to be on the field. She started in just one of the team’s seven matches at the World Cup but made in appearance in six of the seven.

Lloyd has recently been in the news for banging in 50-plus yard field goals and reportedly even received an offer to kick for an NFL team.