Carlos Boozer’s Son Cameron Is 14-Years-Old, 6-Foot-9, And One Of The Country’s Top Prospects 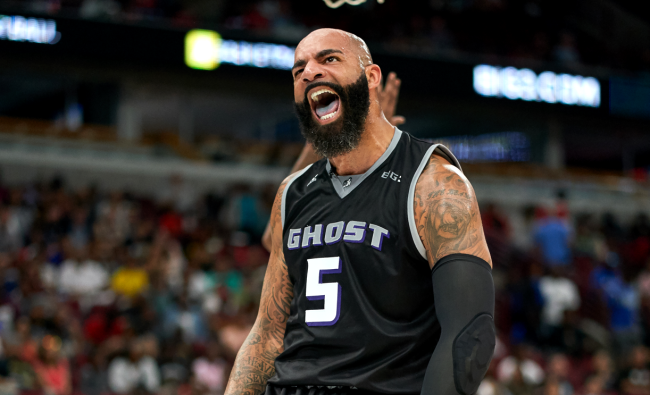 Yet another son of a professional athlete is garnering a lot of attention by following in his dad’s famous footsteps and becoming a force in their sport at a young age.

Over the weekend, media outlet Swish Cultures shared on Twitter that the 6-foot-9 Cameron Boozer was the youngest player ever to be named as a Top 100 Camp all star.

They also shared a minute long highlight video showing off some of Cameron’s skills on the court.

6’9 Cameron Boozer ( @boozer_cameron ) is only 14 years old and is super skilled. Carlos Boozer’s son is the Youngest player ever to be named as a @Top100Camp all star 🗣 @JordanRichardSC pic.twitter.com/3PoTBjvdmH

Former first round pick Kendrick Perkins, who won a title with the Boston Celtics before retiring and becoming an analyst for ESPN, saw the highlight video and responded, “He’s Top 5 in the Country regardless of class!!! Carry the hell on…”

Cameron’s dad Carlos was a McDonald’s All-American and a two-time PARADE All-American, winning back-to-back state titles when he was in high school.

Just like his dad, the high school freshmen reportedly has a standing offer to play at Duke when he graduates from high school.

Cameron Boozer, son of former NBA star Carlos Boozer, might be the top prospect in the class of 2025

Back in May, after participating in the Nike Elite Youth Basketball League in Louisville, 247sports.com wrote, “Like his father, he has a big and strong frame and is a very impressive athlete, he plays with an edge and is extremely skilled for a big at this stage of development.”

The site also wrote about Cameron’s performance, “When a 215-pound big man is taking the ball the length of the floor before hitting his defender with a crossover-jab at full speed, getting by him off the dribble and then finishing with his left-hand with a reverse, you can’t help but wonder who else can do that.”

At the Top 100 Camp this past weekend, Cameron Boozer was reportedly just one of four prospects from the Class of 2025 that were in attendance.

Cameron’s twin brother Cayden, also ranked as one of the best players in the class of 2025, was one of the other four to play at the ESPN Wide World of Sports Complex near Orlando.