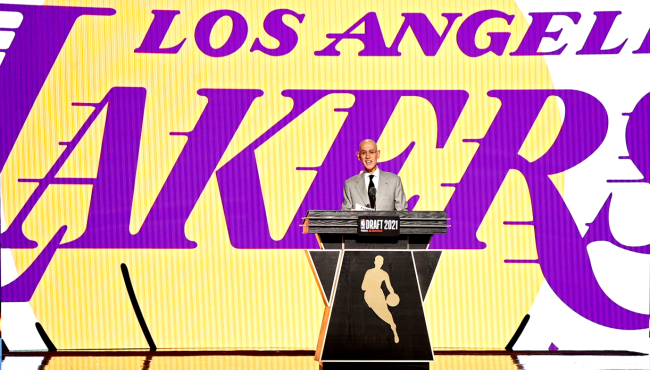 If the Los Angeles Lakers were looking to improve attendance at their NBA Summer League games on Thursday night then mission accomplished.

Following the 2022 NBA Draft, in which Los Angeles drafted Max Christie from Michigan State with their one and only pick, the Lakers went out and signed a couple of big name free agents.

Or well, the sons of a couple of big names, at least.

Shareef, 22, the son of Shaquille O’Neal, entered the 2022 NBA draft over the objections of his father.

“We kind of bump heads about this process,” Shareef told the media this week. “He wanted me to stay in school. I wanted to better myself through this.”

“He didn’t do any pre-draft workouts; he just got straight on the [Orlando Magic], so it’s a different grind,” Shareef added of his father. “So, he didn’t want me to do this, and I know he probably doesn’t want me saying this, but sorry. We’re both grown. We’ll get past it.”

Meanwhile, 21-year-old Scotty Pippen Jr. signed with Klutch Sports in May and had the full support of his famous parents.

Congrats my love!!! You’re going to your fav team @lakers I couldn’t be more proud of you https://t.co/WI6ADDadU2

O’Neal, who will play in the NBA Summer League for the Lakers, previously played one season at UCLA then transferred and played for two more seasons at LSU.

In 37 college games, the 6-foot-10 Shareef averaged 2.6 points and three rebounds per game.

Pippen, on the other hand, played 90 games in three seasons for the Vanderbilt Commodores, averaging 17.5 points (20.4 and 20.8 over the past two seasons) and 4.3 assists per game. He signed a two-day deal with L.A. and is also expected to participate in the Summer League.

Many NBA fans took great pleasure in the fact that both of the famous sons signed deals with the Lakers.

LeBron will soon be playing with his son, Shaq’s son and Scottie Pippen’s son. https://t.co/tKZBLJbnMp

Lakers have signed both Scottie Pippen and Shaq's sons who went undrafted.

Laker fans realizing they not actually getting Scottie pippen and Shaq pic.twitter.com/AOdgywHgHv