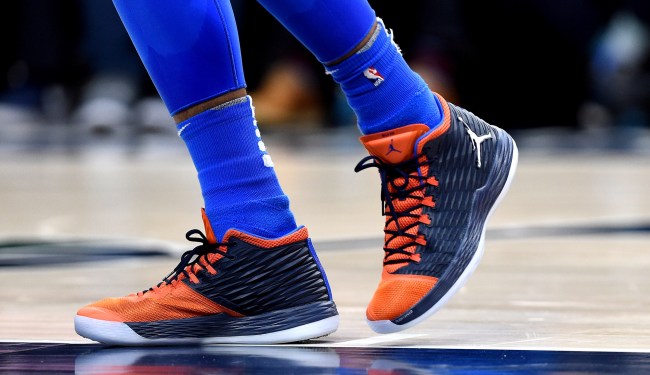 It’s been so long now many fans forget that Carmelo Anthony and LeBron James were in the same NBA draft class with Melo being taken third by the Denver Nuggets and LeBron being the number one overall pick. (Anyone remember who went in between them at number two? That’s right. Darko Milicic.)

When Anthony and James were drafted they each naturally were going to sign a shoe deal. Everyone knows that LeBron signed with Nike for a mint, but what many fans may not realize is that Michael Jordan (who almost signed with Spot-Bilt coming out of college) actually ended up choosing Melo over The King to be the first signature athlete, after MJ himself, to represent the Air Jordan brand of sneakers.

Appearing on Uninterrupted this week, Anthony shared a little behind the scenes look at what was happening at that time.

“People don’t know my first year I was signed to Nike. Right? I didn’t have a signature shoe because the brand at that point in time I was the first signature athlete,” said Anthony.

“I remember there wasn’t a plan at that point in time. Right? But LeBron was at Nike, and MJ stepped up and said, ‘Look, I’ll pay half, Nike pay half. Look, I’ll take Melo, y’all got LeBron, Converse got D-Wade and Bosh.’ They had a crew over there at Converse.

“My first sneaker I ever played in with Jordan was a 16.5 or some sh*t like that. And I remember playing in my first game in preseason and the sneaker came off as I was playing. I was like, ‘You know what? I’m not playing in another retro again. Let’s work with the signature shoe.’ And that’s how everything got started.”

Anthony also talked about how he and LeBron (and Dwyane Wade, who was also in their in their stacked draft class) were treated like the young bucks that they were on a 2004 Olympics Team USA roster filled with players like Allen Iverson, Stephon Marbury, Tim Duncan, and Amar’e Stoudemire.

The fact that players like Richard Jefferson and Shawn Marion were starting over them didn’t sit too well and they wanted to make sure the vets knew it. (11:07)

“When we made that pact it was just like, ‘What? They’re playing in front of us? Really?’ That was me and Bron’s mentality,” said Melo. “But then, we used to go to practice, and in practice that was our games.

“We used to huddle up before practice and be like, ‘Yo listen. Let’s go to war. We want to smoke today. If they ain’t ready to play today, it’s on.’”

Melo later added, “You gotta think the vets back then they were arrogant,” Melo said. “They wasn’t like, ‘I got you young’un. I got you, Imma take care of you.’ It was not. You out there by yourself.”