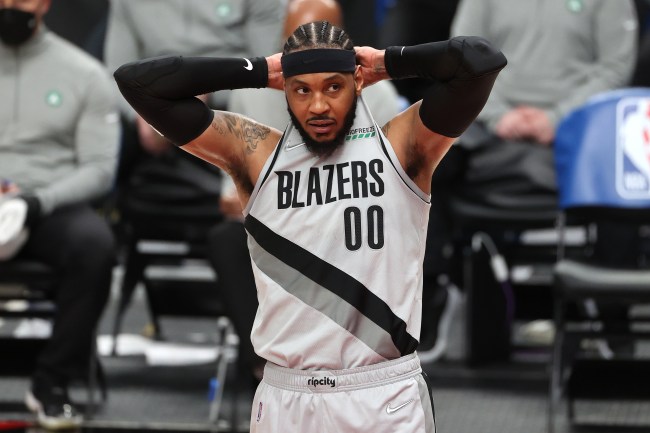 The Carmelo Anthony mistress situation has taken another turn and it seems like things are only to get messier from here on out.

Earlier this week, a woman came forward to allege that the NBA player had fathered twins while he was still married to his wife LaLa Anthony. The woman claims Anthony flew her out to London to keep their relationship secret when she got pregnant but that he has yet to see the twins who were born prematurely in April.

The woman, who has decided to remain anonymous, once again spoke to Hollywood Unlocked and claims that LaLa’s best friend Kim Kardashian has hired a private investigator to find out her identity.

On top of dealing with the stress of Carmelo [allegedly] being an “absent father,” the woman detailed how stressed she‘s been after learning that La La Anthony’s best friend Kim Kardashian [allegedly] hired a private investigator to find out who she is. The woman alleged that Kim was able to obtain some information about her and shared what she knew with La La. It was said that Kim called La La hysterically crying when she delivered the news. Although the woman stressed to us that she wants no problems with the “POWER” actress, she fears Kim may try to do damage control and make her out to be the bad person in this situation.

A member of Kim Kardashian’s team immediately denied the reality star’s involvement in trying to find the woman’s identity but did admit LaLa and others are launching their own investigation to find out what’s going on.

“Now, we exclusively spoke with Tracy Romulus, the CMO of Kim Kardashian’s KKW Brands and she denies allegations that Kim Kardashian had any involvement in this or hired a private investigator for La La. However, Romulus shockingly admitted that she did hear about Carmelo’s alleged twins and acted on her own to reach out to a third party to get additional information. Romulus went on to adamantly voice that it was her own interest to get to the bottom of this and acted independently since she too is a good friend of La La — completely distancing Kim Kardashian from this entire situation.”

It sounds like we’ll know sooner than later if the woman is telling the truth about her affair with Carmelo Anthony.