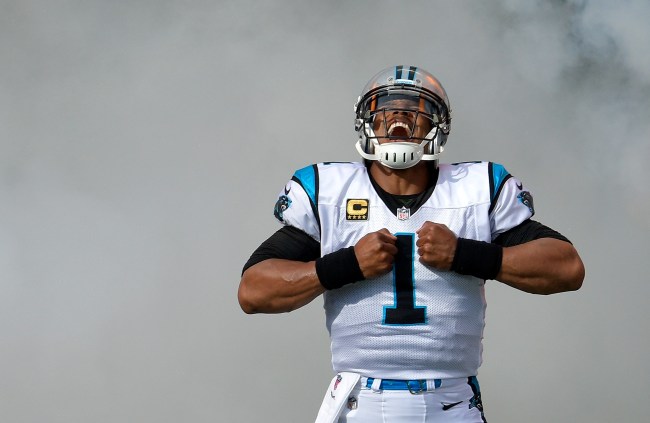 Cam Newton can’t get any respect from the Carolina Panthers organization.

Back in March, Newton got into it with the team when they insinuated that he asked for a trade.

Stop with the wordplay. I never asked for a trade, there is no dodging this one, I love the Panthers to death and will always love you guys, please do not try and play me or manipulate the narrative and act like I wanted this. You forced me into this

The Panthers went on to release Newton about a week later.

On Wednesday afternoon the Panthers asked fans who is the GOAT among Carolina players: Steve Smith, Julius Peppers, or Luke Kuechly.

Obviously fans noticed Newton, who was the team’s only MVP in franchise history and the only QB to take them to the Super Bowl, was not one of the options.

wait, someone is missing… https://t.co/Uh7msfOGf7

Cam Newton took that team to a SuperBowl. The first one since 2004. Broke almost all QB and broke a few RB team records. And on top of that was the only Panther to win MVP. Cam was the best thing that happened to that team and this is how y’all repay him.

Have a great day. pic.twitter.com/V9MDgjANDn

Cam Newton single handedly drug your mediocre at best organization to the Super Bowl and won your only MVP award. Not making room for him on this discussion/list is disrespectful AF. https://t.co/p2RxHIWhlw

Panthers I love ya but Cam should be an option. https://t.co/6ksxEwRMBS

One of the most sorry franchises in the NFL pretends that their best and most impactful player never existed. True comedy. https://t.co/Dch1VoEf8h

Not having Cam in this pic is comical…cmon now 🤦🏾‍♂️ https://t.co/aqKkyTM2nx

LMFAO cam carried ya bum franchise and you leave him out 😂😂😂 https://t.co/9MU5zuoMnl

CAM NEWTON is the GREATEST PANTHER of ALL TIME smh what is this non sense 🤬🤬🤬🤬🤬 https://t.co/52tnRmtUzB