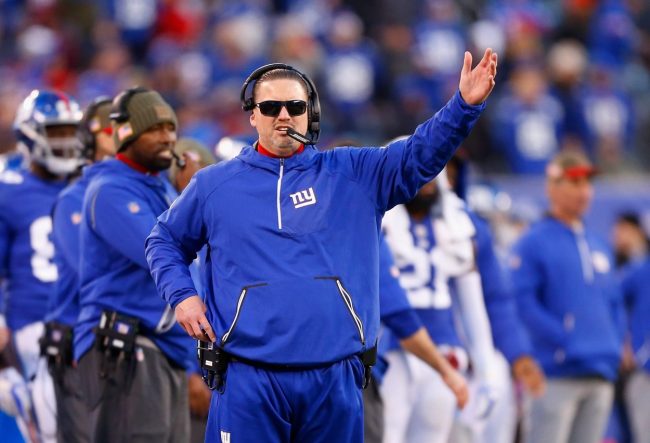 What the Carolina Panthers and head coach Matt Rhule are doing is unclear. Earlier this year, they fired offensive coordinator Joe Brady, and now they are replacing him with someone that they denied a job of lesser standing in each of the last two years.

Former Giants head coach Ben McAdoo, who was the butt of many jokes throughout his time in New York, is expected to become the next offensive coordinator in Charlotte. Details are being worked out, but an official announcement should come in the coming days.

The #Panthers are expected to hire former #Giants HC and ex-#Packers OC Ben McAdoo as their offensive coordinator, sources say. They need to work out the contract, but there aren’t expected to be issues. McAdoo is back as an OC, where he initially rose to prominence.

After going 11-5 in his first year with the Giants, McAdoo’s second year with the team was an utter disaster. New York went 2-10 in 2017 and was fired after the season.

McAdoo did not get another job until 2020, when he took over as the quarterbacks coach for the Jaguars. He was let go the following season.

Now he is set to take over a Panthers offense that was near the bottom of the NFL rankings for most major statistical categories. It will be interesting to see what he can do, because McAdoo does have experience, but his track record does not follow.

However, the hire is rather strange because McAdoo has been denied jobs with Carolina in very, very recent history. He interviewed for the Panthers’ quarterback coach position in each of the past two years.

McAdoo did not get the job either time. And now the team is giving him an upgrade to oversee the entire offense. Hm.

The biggest thing that McAdoo’s offense lacked in New York was creativity.

While under his watch, the Giants ran a very basic offense without any pomp or flair. It was a balanced approach that relied as much on the pass as the run.

With quarterback Sam Darnold expected to be under center next year, perhaps the hire was intentional. Get Darnold back to the basics and let him rediscover the success he had at USC and has shown in spurts on the NFL level.

The internet had jokes:

Remember when Ben McAdoo completely changed his haircut midway through his two year stint with the Giants pic.twitter.com/UJrNCzb2Pf

Will the Panthers offense be better with Ben McAdoo as OC? pic.twitter.com/AcjbrMdlOI

To be fair… Ben McAdoo does dress like a rock star. pic.twitter.com/5sDUSBm9Ms

Ben McAdoo cooking up one of the worst offenses in the NFL pic.twitter.com/ziN5E1O9N1