Carolina Panthers Set To Use $125,000 Virus-Killing Robot To Help Clean Stadium As Fans Are Set To Return With Restrictions 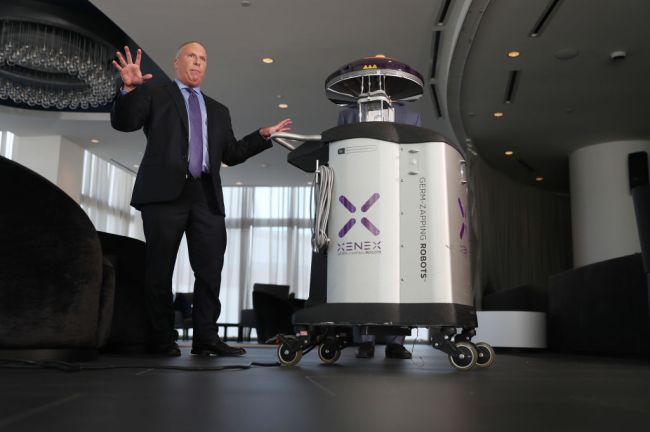 The Carolina Panthers are set to allow a limited number of fans inside their stadium for the first time this season after North Carolina Gov. Roy Cooper announced large outdoor venues can have up to 7% capacity. The rule goes into effect on Friday, therefore the Panthers can allow a total of 5,286 fans inside Bank of America Stadium.

To prepare for the first home game with fans this season, the Panthers have to make sure all is in order from a cleanliness standpoint and they’re relying on robots to get the job done.

The team announced that it will be using germ-killing robots made by a company called Xenex, which specializes in disinfection for health-care services. The robots, which are more commonly used to clean up to 60 hospital rooms per day, cost approximately $125,000 each; the Panthers purchased two of them.

The two ultraviolet XenexLightStrike robots will be used in showers, locker rooms, and other areas around the stadium.

As for how these robots exactly work, the company stated that “the robots’ broad-range spectrum of UV light wavelengths penetrate the cell walls of pathogens and destroys their molecular structure. This includes the deadly coronavirus.”

The robots can kill viruses on surfaces, including countertops and computers, without “causing damage to equipment, furniture, clothing, and other items,” the company said. However, it said, the robots are not safe for use on humans or animals.

These robots have reportedly been used at San Antonio International Airport to help clean surfaces for the past two months.

The Panthers, and their two robots, host the Cardinals on Sunday at 1:00 PM EST.