Caroline Wozniacki Surprisingly Announces Her Retirement From Tennis At Age 29 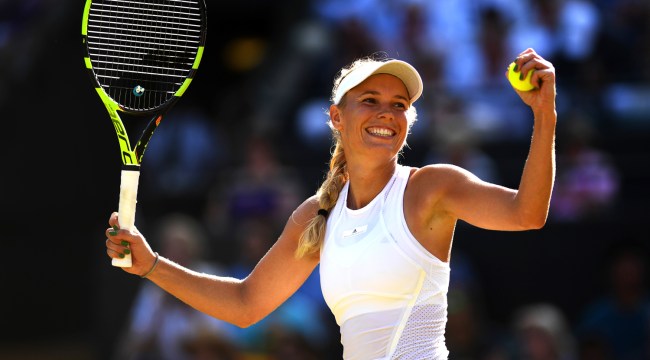 In a rather shocking move, tennis great Caroline Wozniacki issued a surprise announcement Friday morning revealing that she will be retiring from the sport at age 29 following the Australian Open in January.

Wozniacki, currently ranked number 37 in the world, is a multiple-time former world number one, a spot she held as recently as January 2018 following her first Grand Slam title at the 2018 Australian Open.

In a statement issued on social media, she said the reason behind her retirement has nothing to with injury or her health, though she did struggle with that throughout 2019 – the first season she did not win a tournament since 2007.

Rather, Wozniacki claims that she is retiring from tennis to spend more time traveling, growing her family with her husband David Lee, and spreading the word about rheumatoid arthritis – a condition she revealed she was diagnosed with in October of 2018.

“I’ve played professionally since I was 15 years old. In that time I’ve experienced an amazing first chapter of my life. With 30 WTA singles titles, a world #1 ranking for 71 weeks, a WTA Finals victory, 3 Olympics, including carrying the flag for my native Denmark, and winning the 2018 Australian Open Grand slam championship, I’ve accomplished everything I could ever dream of on the court,” Wozniacki wrote.

“I’ve always told myself, when the time comes, that there are things away from tennis that I want to do more, then it’s time to be done. In recent months, I’ve realized that there is a lot more in life that I’d like to accomplish off the court. Getting married to David was one of those goals and starting a family with him while continuing to travel the world and helping raise awareness about rheumatoid arthritis (project upcoming) are all passions of mine moving forward.

“So with that, today I am announcing that I will be retiring from professional tennis after the Australian Open in January. This has nothing to do with my health and this isn’t a goodbye, I look forward to sharing my exciting journey ahead with all of you!

“Finally, I want to thank with all my heart, the fans, my friends, my sponsors, my team, especially my father as my coach, my husband, and my family for decades of support! Without all of you I could have never have done this!”

Reactions from her peers and other famous friends were unanimously positive.

“Hall of Fame career! I couldn’t be more proud of you and so excited to see what the future brings! I love you wifey! ❤️❤️❤️,” wrote her husband David Lee.

“Amazing career!!! So much to be proud of!! Now on to the next chapter!! We can hang out in the retirement club!” said Lindsey Vonn.

“Caro! 🙌🏼 I love how you have framed this. SO true! It’s just the beginning.❤️ All you have accomplished already is just the tip of the iceberg of all that you will do. Love you! Good luck in January. 💪🏼,” wrote SI Swimsuit Editor M.J. Day.

“You’re one of the all-time greats. We adore you! Congratulations on this next chapter!!!!” commented friend and wife of Andy Roddick Brooklyn Decker.