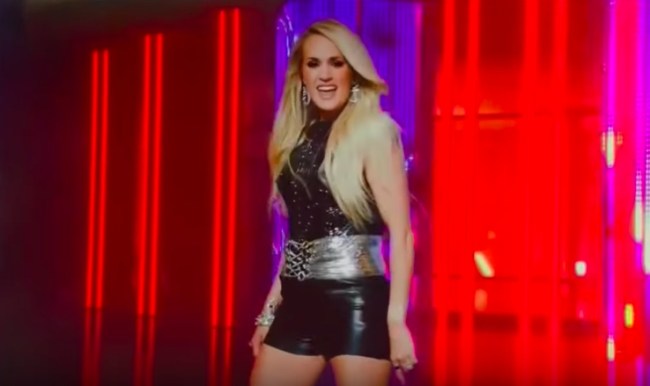 At some point in history, the powers-that-be in the NFL decided what the league really needed to get fans amped before a game is a theme song from a fairly-high profile country musician talking about football stuff.

As a result, they turned to Hank Williams Jr., who was a staple of Monday Night Football since the 1980s thanks to his pregame jams previewing the matchup of the night.

However, the artist was put on notice a few years ago when Carrie Underwood decided to get into the game on Sunday Night Football with the fire track known as “Ohhhhhhhhhhhhhh, Sunday Night” (I’m not entirely sure how many h’s the “official” title has).

For the last couple of years, Underwood’s ohhhhhhhing has been a staple of Sunday Night Football broadcast but the artist apparently decided it was time to change things up heading into the 2018 season.

The new theme debuted ahead of last night’s matchup between the Packers and the Bears and it appears the iconic “ohhhhhhhs” may be a thing of the past and “GAME ON!” is officially the new rally cry this year.

I know I should not care as much about corporate-sponsored theme songs as I do but I was decidedly not a fan of this newest iteration— and it turns out I’m not the only one.

Here are just some of the many reactions I’ve come across from people who seem to feel the same way.

There's no sense in telling you that the NEW Carrie Underwood #SNF song stinks. We're all still waiting for Faith Hill to come back and fix the shit.

Cons:
—Did not sing "ohhhhhhhhhhhhhhhh" in advance of saying that it was Sunday night

I love Carrie Underwood with every fiber of my being but what is this new SNF song?

There were also a couple of people who suggested we just put an end to the practice entirely.

If three decades of history are any indication, it doesn’t seem like these theme songs will be going anywhere anytime soon, and you can bet people are going to keep complaining about them until they do.

Now if you’ll excuse me, I suddenly have the urge to down a nice cold Pepsi before noon on a Monday.