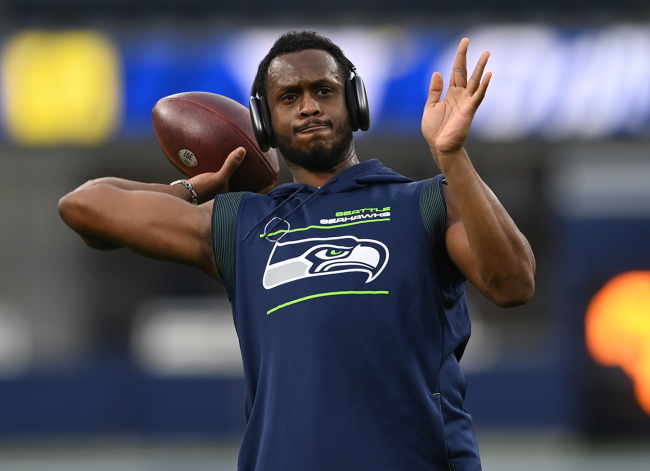 The Seattle Seahawks traded away Russell Wilson during the offseason. That leaves the team with two quarterbacks— Geno Smith and Drew Lock.

While much of the NFL world assumes that neither guy is the long-term answer at the position, head coach Pete Carroll seems to think otherwise. Throughout the offseason and during early-season workouts, he has been very positive about Seattle’s plan at quarterback.

Whether it be Lock or Smith that takes the first snap in Week 1, Carroll remains confident in either one of his options. He says that he is getting them both ready.

“They’ve been really impressive,” Carroll said after minicamp. “And it’s not been any one sequence here or one day here. They have just been solid throughout. We’ve shared a ton of reps. Geno has gone with the first group throughout, but they’ve had very close to equal reps in situational opportunities throughout. … They’ve done a terrific job so far. They look in control.”

However, as the Seahawks hold their first quarterback competition in a decade, it is becoming clear which quarterback will be under/behind center when the season begins in September.

First and foremost, Smith consistently took reps with the first team throughout minicamp. Secondly, Carroll said himself that Smith is currently in the lead, but added that Lock is not far behind.

“Geno’s still ahead — you can tell that — but it’s not going to be too much for Drew to be caught up. By the time we get through camp, he’ll be there. He’s really bright. It makes sense to him. He’s really sharp in the huddle and at the line of scrimmage and all of that, so it’s just time that he needs …”

There has been a lot of speculation that Seattle could trade for a veteran quarterback like Jimmy Garoppolo or Baker Mayfield. However, Carroll continuously repeated that the team is in “great shape” with their current options, so it does not look like a deal is in the works.