Carson Wentz Makes First Public Statement About Being Knocked Out Of Playoff Game: ‘Head Injuries Are A Scary Thing’ 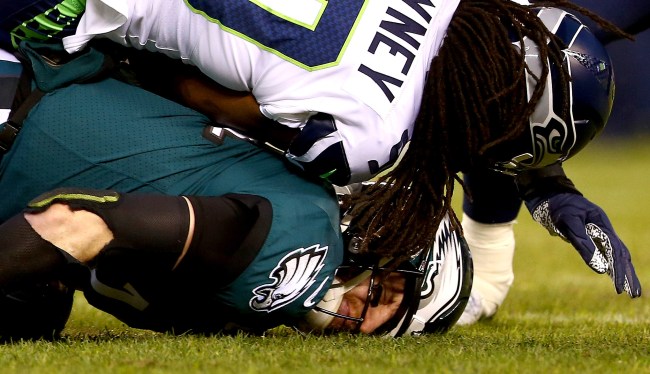 Monday morning, after being knocked out of Sunday’s Wild Card game versus the Seahawks with a concussion, Philadelphia Eagles quarterback Carson Wentz addressed the head injury he suffered during the game.

“So dang proud of this team and how we battled and overcame so much this season. Not the ending we envisioned but we will all grow and be stronger because of it! The fight and resiliency that this team displayed was so impressive. Love these guys!” Wentz wrote on Instagram.

“Also, appreciate the thoughts and prayers— Im feeling good today and will be just fine! Head injuries are a scary thing so I appreciate everybody’s thoughts and prayers. Hate not being out there to finish it out with my guys because of a play like that, but it’s the unfortunate part of this game. It’s all in Gods plan, not mine! Trusting in him 🙏🏻 Philly, year 4 was one fun ride. Appreciate the love and support— especially the real ones who were with us through the highs and lows 👊🏻 Onward to next year… big things comin’, believe that! #flyeaglesfly.”

Wentz writing, “because of a play like that” certainly isn’t going to quell the death threats Jadaveon Clowney expects to get this week.

During Sunday’s game following his exit, Wentz’s wife Maddie was called to the locker room and then later seen leaving with a suit, presumably the quarterback would have worn following the game, leading to speculation that his head injury was more than your average concussion and that perhaps he had to make a trip to a local hospital before returning to the team’s locker room for the end of the game.

Sal Paolantonio reports that Carson Wentz’s wife has been escorted to Eagles locker area.
Once Wentz was removed from medical tent to locker room for further concussion testing, it raised level of concern for @Eagles.
It’s a medical decision. No official word yet.

In this clip you’ll see Carson Wentz’s wife leaving with the suit he would’ve worn at his press conference. 😥#Eagles pic.twitter.com/gH21J1wP1O

Following the Eagles loss, Wentz actually apologized to his teammates in the locker room, according to safety Malcolm Jenkins.

“He’s like apologizing and stuff,” Jenkins said after the game. “It’s like, ‘Bro, it’s out of your control.’ He didn’t let us down at all. We wouldn’t be in this spot without Carson.”

Wentz, who played in all 16 games this season for the first time since his rookie season, has helped lead the Eagles to the playoffs twice, but has only been able to throw a total of four passes for three yards in those two postseasons combined due to injury.