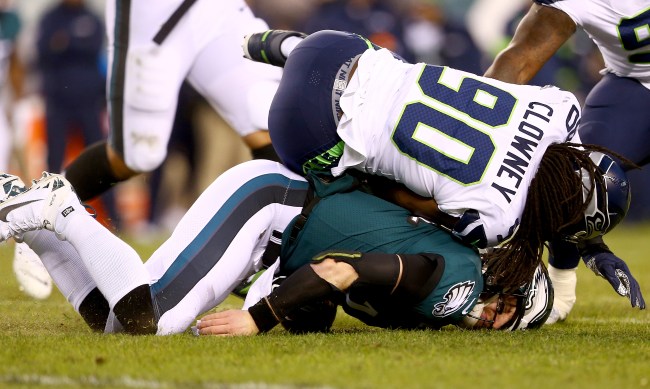 At the time of this writing, the people of Philadelphia are gathering around the Liberty Bell to decide the proper vigilante justice to impose on Jadeveon Clowney for all but destroying their chance to advance past the Wild Card before they even begun. Death by 1,000 cheesesteaks is the current consensus.

During the first quarter, the Seahawks defensive end delivered a questionable shot on Carson Wentz as he dove to the turf, making contact with Wentz’s helmet and upper back that would ultimately sideline him for the rest of the game.

Still can’t believe this hit. Clowney deserves to be fined at the very least. pic.twitter.com/UnroRisgDI

After the play, Eagles left tackle Jason Peters confronted Clowney on the field after seeing a replay of the hit.

“I checked Clowney about it,” Peters said. “He was mouthing, I was mouthing back at him. … I just told him, ‘Man, that’s a dirty play.’ And he’s like, ‘My bad,’ and we just kept playing.

“I just kept reminding him, ‘Man, stay off my quarterback.’ [ESPN]

After the game, Clowney said he was not trying to injure Wentz.

“It was a bang-bang play. I don’t intend to hurt anybody in this league, let me just put that out there. I’ve been down the injury road; it’s not fun. My intention was not to hurt him. I was just playing fast.”

While Clowney did call Wentz a “great player” and express hope that “he’s ok,” the three-time Pro Bowler did rub salt in the wounds of the entire city of Pennsylvania.

“There might be death threats,” he said. Clowney also noted that fans at Philadelphia’s Lincoln Financial Field are “the worst fans in the world.”

This won’t be the only time Clowney has absorbed blowback from Eagles fans. It wasn’t long ago that Clowney, as a member of the Texans, tried to decapitate Nick Foles.

“These fans hate me. They think I tried to kill Nick Foles. It was a bang-bang play.”

Remember Clowney did not get a facemask call on Nick Foles. Wentz was on the ground when Clowney hit him helmet to helmet and drove his head to the ground. Wentz was already down though by previous contact. Calls don’t match the severity on the hits.
pic.twitter.com/Q7RSTot4IQ