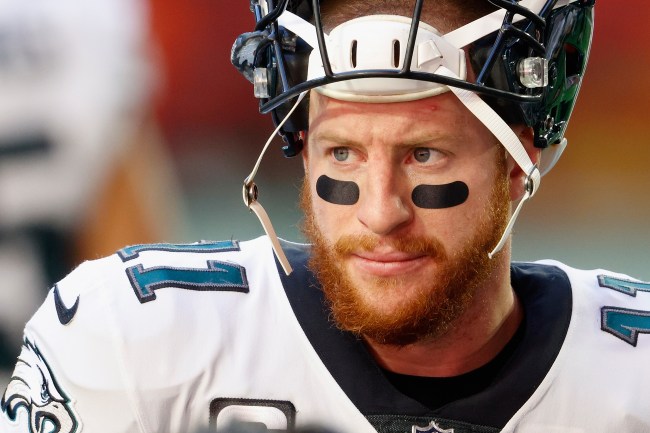 Remember when Carson Wentz was an MVP candidate and looked like he was going to be the next young star at quarterback in the NFL? Yeah, it wasn’t that long ago, as the Philadelphia Eagles’ signal-caller was tearing it up during the 2017 NFL season prior to his knee injury late in the year. Since then, the team won a Super Bowl with its backup — shoutout to Nick Foles — and Wentz has looked… pathetic.

Whether it’s the players around him, the scheme, that inner clock in his head telling him to rush throws or something entirely different, Wentz has struggled over the past couple years. He was so lost this season that Eagles coach Doug Pederson even benched him in favor of rookie Jalen Hurts, seemingly signaling the end for the former No. 2 overall pick in Philly.

After signing a four-year, $128 million contract extension in 2019 that included $107 million guaranteed, Carson Wentz is a problem the Eagles don’t want to think about. Keep him and they’re paying a top-5 quarterback salary to a backup. Release or trade him and the team gets hit with a massive penalty. But is there a way the Eagles and Wentz come out as winners this NFL offseason should a trade occur? According to ESPN’s Mike Tannenbaum, you better believe it.

Appearing on Get Up Wednesday morning, the former Jets general manager discussed a unique possibility that involves the quarterback actually paying the Eagles $20 million in order to get shipped out of town. After previously saying he didn’t want to be a backup, repaying Philly millions for a chance to possibly start again elsewhere may be the play for Wentz — and here’s how Tannenbaum suggests it could all happen.

How Carson Wentz & The Eagles Can Both Win, as discussed on @GetUpESPN with @Espngreeny and @BartScott57 pic.twitter.com/dPYGmINMVb

As Tannebaum suggests, should Carson Wentz decide it’s worth paying the Eagles $20 million to leave town, Philly would receive something called a “cap credit,” which would lower his dead cap hit to $13 million should he be traded. That’s significant considering the quarterback is currently set to count for $33 million against the team’s cap in 2021 — which is before he’s set to receive a 2021 roster bonus in early March.

Wentz has to know his time in Philly is over — especially after seeing how well Jalen Hurts has performed in his limited action. With the writing on the wall, the quarterback should cut his losses, repay the Eagles, get a fresh start and simply renegotiate a contract with whatever team trades for him.

Sure, it’s easy for me to sit here and tell a 28-year-old dude that repaying $20 million is the smart thing to do, but if Carson Wentz truly sees himself as a starter in the NFL again — and he could benefit from a new start with a new coaching staff and lower expectations — he should jump at this opportunity. Otherwise he may just continue to hold a clipboard and collect a hefty paycheck for the entire 2021 NFL season.

So here’s my final thought to Wentz: Bet on yourself, repay that cash to give the Eagles the cap credit, and go compete your ass off to win a starter’s job elsewhere. It’s time for new beginning.