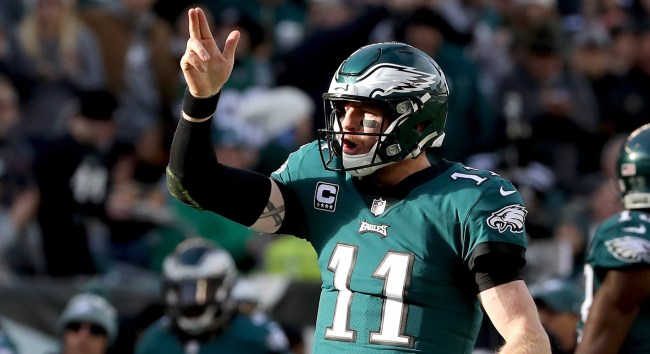 Carson Wentz’s season went from bad to much worse this past Sunday when he was benched for rookie quarterback Jalen Hurts during the Eagles’ 30-16 loss to the Packers. The idea that Wentz is ‘broken’ and done in Philadelphia is nothing new, but it appears that he and the franchise have completely hit rock bottom.

Wentz will soon turn just 28-years-old and he’s only three seasons removed from being a Pro Bowler. Those two things could make a few teams around the league inquire about possibly trading for him if in fact the Eagles move on from him. On the flip side of that, we’re talking about a guy that hasn’t played to a starting NFL QB level much at all this season, and one which carries a four-year contract with the ginormous annual average salary of $32 million.

The Eagles can’t cut him due to that massive contract extension they signed him to therefore the only way out seems to be via trade.

FOX Sports 1’s Nick Wright laid out two teams that could be interested in taking on Wentz and his contract: the Colts and the Bears.

"Carson Wentz is uncuttable. The question is: is he tradable? I think he's tradable to the Colts. … If you're the Eagles, your only path forward is convincing the Colts to take him. I think he's done in Philly." — @getnickwright pic.twitter.com/8SJRN77KfZ

Philip Rivers runs the show in Indianapolis at the moment, but he’s 39-years-old and could hang it up after his one-year deal runs out at the end of the season. As for Chicago, the Mitchell Trubisky experiment seemed to be working out okay at the start of the year but it has since gone horribly wrong. The Bears could only be a legitimate quarterback away from being a contender, but whether or not they see Wentz as that guy is the big question.

This entire situation involving Wentz and Philadelphia has looked like a horrible marriage for quite some time now. Wentz seems like a guy that needs a change of scenery while Eagles fans are fed up with mediocre play on the offensive side of the football.