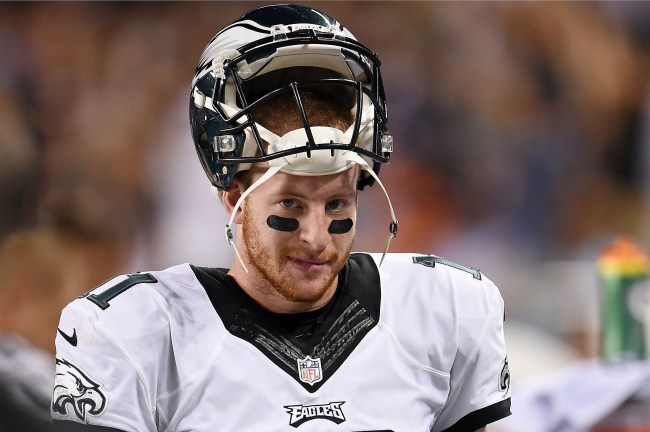 The Philadelphia Eagles might be getting a little greedy as they shop Carson Wentz on the trade market.

On Saturday afternoon ESPN’s Adam Schefter revealed that the Eagles were poised to trade Wentz in the coming days and are looking for a big return in exchange for the QB.

Eagles are expected to trade Carson Wentz in the coming days in what would be the latest blockbuster QB deal to rock the NFL, sources tell @mortreport and me. The most pertinent questions now become where, when and for what. But it could happen as early as this week.

The Philadelphia Eagles are expected to trade Carson Wentz in the coming days in what would be the latest blockbuster quarterback deal to rock the NFL, league sources tell ESPN.

The most pertinent questions now become where, when and for what. But it could happen as early as this week, per league sources, even as the Eagles continue to insist to other teams that they would be happy to bring Wentz back to Philadelphia.

The Eagles are said to be looking for, in the words of one well-placed source, “a Matthew Stafford package” in return for Wentz. The Lions traded Stafford to the Rams last weekend for a third-round pick this year, two future first-round picks and quarterback Jared Goff, the player selected directly in front of Wentz as the top two picks in the 2016 NFL draft.

According to NFL insider Greg Bedard the Eagles are looking to get two first-round picks in a trade for Wentz which has led to several teams hanging up the phone on them.

Eagles are asking for two 1s for Carson Wentz, which has led to some dial tones, including from one team previously perceived to be a favored landing spot.

Fans immediately mocked the Eagles for asking for two-first rounders in trade talks for Wentz.

The #Eagles front office has to be kidding. Carson Wentz was arguably the very worst QB in football before he got benched for a rookie and he has a massive contract. Why would a take give up two first round picks for him? https://t.co/vV8E75upuD

They are crazy if they are thinking that they are going to get two firsts for a guy with that big of contract https://t.co/gK4Qtar3Sx

To quote another Philadelphia legend: “For who? For what?" https://t.co/lvKvuec0q9

To quote another Philadelphia legend: “For who? For what?" https://t.co/lvKvuec0q9