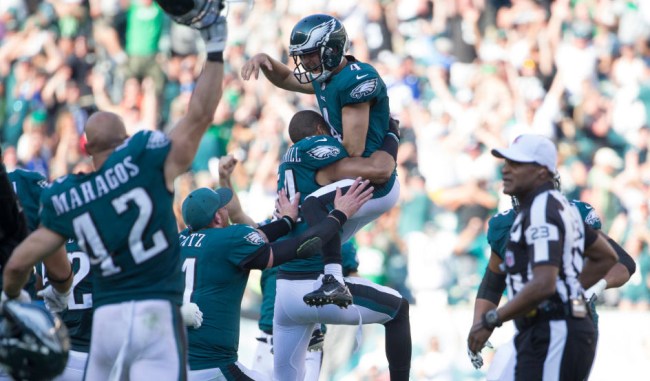 Philadelphia Eagles quarterback Carson Wentz probably thought he was pretty safe when he said on the sidelines Sunday that he’d give kicker Jake Elliott his game check if he nailed a game-winning 61-yard field goal.

After all, as my esteemed colleague pointed out on Tuesday, if Elliott made it would become the longest field goal in franchise history and only 10 kickers in NFL history have made one from that deep.

We had @cj_wentz mic'd up for #NYGvsPHI and, well, just listen for yourself. #FlyEaglesFly pic.twitter.com/jEyB1msn1o

Whoops. Elliott actually nailed it, sealing the Eagles win over the hated Giants, much to the delight of his family.

So is Wentz going to be a man of his word? Here’s what he had to say about it on Twitter this morning…

but don't worry, @jake_elliott22 and I got this worked out…

Hmmm…wonder what that means? Regardless, I am guessing that Jake Elliott will make out very well on whatever they decided to settle on as payment.

Jake Elliott strolling up to Eagles practice like… pic.twitter.com/rLBDZiAq0r