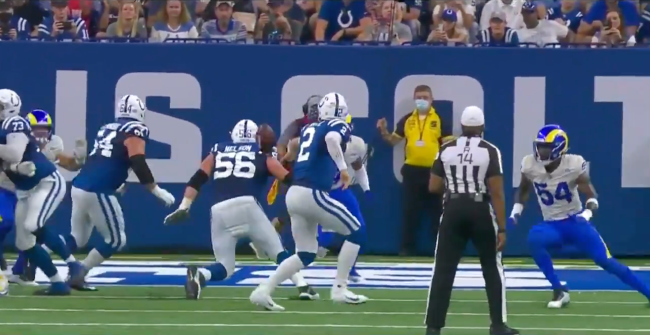 What on earth is Carson Wentz doing here?!

During Sunday’s game against the Los Angeles Rams, the 28-year-old quarterback threw what is probably, if not definitely, the worst shovel pass in the history of football. It was truly, truly terrible.

The Colts began their drive in opposing territory after an interception. A few Jonathan Taylor runs and a couple of completions to Mo Alie-Cox and Michael Pittman moved them into the redzone.

Facing 3rd-and-goal at the 3-yard-line, Frank Reich dialed up a questionable play call. Wentz rolled to his right with the offense, and the team’s left guard and tight end pulled that way.

Designed to look like a run to the outside, Wentz stopped, turned back to his left and threw a nonchalant shovel pass to tight end Jack Doyle.

However, as Doyle was pulling, he took a hit and fell down. The pass turned into an incredibly awful interception.

Just look at this effort. Doyle is not only three steps behind, but he is nearly on the turf.

And yet, for some reason, Wentz proceeded to flip the ball in his direction. Former University of Delaware linebacker Troy Reeder just so happened to be in the gap and stepped up for the interception.

Everything about the third down attempt was abysmal. Reich got too cute, Doyle couldn’t get free, Wentz made the ill-advised pass, and the Colts paid the price.