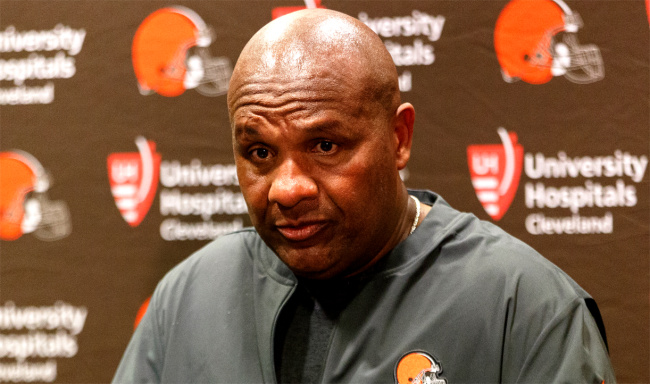 Hue Jackson, who went 3-36-1 during his time as head coach of the Cleveland Browns, strongly hinted back in February that the team offered him money to lose games on purpose.

Browns owner Jimmy Haslam denied that any payment was offered to Jackson to lose games in Cleveland, but the NFL launched an investigation anyway.

On Monday, the NFL released the results of its investigation into Hue Jackson and his allegations about the Cleveland Browns tanking.

The league, of course, said that its 60-day independent review “found no evidence” that no one in the Browns organization “sought to lose or incentivized losses and made no decisions deliberately to weaken the team.”

The NFL also admitted that their “comprehensive review,” as they put it in their statement, did not involve actually interviewing Hue Jackson, raising more than a few eyebrows.

Numerous documents, including a cease and desist letter sent to Hue Jackson by the Browns, have been revealed

On Wednesday, Pro Football Talk added another twist to the story when the site revealed that it had obtained a copy of a cease and desist letter the Cleveland Browns attorneys sent to Hue Jackson after making his inflammatory accusations.

In a letter sent by Bart H. Williams of the Proskauer law firm to Jackson, a copy of which PFT has obtained, Williams demanded that Jackson “immediately cease and desist from making any further comments suggesting that anyone involved with the Browns organization sought to lose games while you where the head coach.”

The letter warns Jackson that “[a]ny claim by you or others on your behalf that the Browns either wanted to lose or paid you to lose is defamation, for which you are liable.” The letter goes on to warn Jackson that the Browns “reserve all rights to seek relief against you,” if Jackson continues to commit alleged breaches of the release agreement that he signed after being fired in October 2018.

Jackson, at some point in the process, did try to walk back his insinuation about the Browns tanking. It is unclear if that occurred before or after Jackson received the cease and desist letter.

The former Browns coach also did not participate in the investigation after failing to receive certain assurances from the NFL before cooperating.

According to Sports Illustrated, which published a very lengthy and in-depth report on the allegations, “On March 29, Jackson’s camp laid out conditions for his participation: The full scope of the investigation be presented to Jackson in writing, for which Jackson would sign a confidentiality and nondisclosure agreement; waivers, releases of claims, and indemnity for Jackson, his attorneys and Kimberly Diemert, the head of his foundation; and reimbursement for legal fees and any other costs incurred. White responded via email that the NFL does not release, indemnify or pay the legal fees of witnesses and can not disclose the details of an ongoing investigation to third parties. A letter dated April 12 from Jackson’s lawyer, David Lisko of Holland & Knight, reiterating Jackson’s conditions, did not receive a response.”