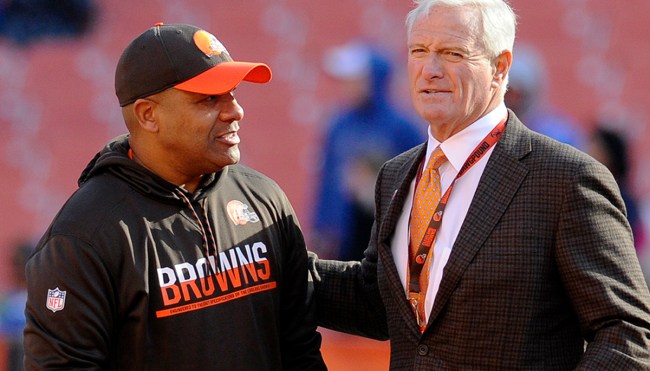 It’s been more than three years since Hue Jackson was unceremoniously kicked to the curb by the Cleveland Browns after leading the team to a 3-36-1 record during his time as head coach—a decision that he may have been the only person on the planet to take issue with.

Since parting ways with the Browns, the man who now patrols the sidelines at Grambling State has not been shy about throwing shade at his former employer. While he’s been somewhat vague when it comes to airing specific grievances, it appears he may have reached a point where he’s no longer concerned about burning any bridges that may still remain intact.

Earlier this week, Jackson retweeted a message referencing the shameless tanking tactics the Browns deployed while he was in Cleveland, which failed to produce the same benefits the Bengals have been able to reap since drafting Joe Burrow following a dismal 2019 campaign where they finished at 2-14.

While the ex-coach has never explicitly said he was instructed to lose games on purpose, he came pretty damn close to doing exactly that after the football world learned about the bombshell lawsuit Brian Flores filed against the NFL on Tuesday. In addition to accusing the Giants of conducting a sham interview to satisfy the league’s Rooney Rule, Flores claimed Dolphins owner Stephen Ross offered to pay him $100,000 for each game he lost in 2019—and it looks like he wasn’t the only coach who had a similar incentive dangled in front of him.

On Tuesday night, Jackson replied to a tweet from Patrik Walker of CBS Sports and suggested Browns owner Jimmy Haslam was surprisingly pleased after Cleveland became the laughingstock of the NFL over the course of two seasons where the team posted a single win.

Well Jimmy Haslam, was happy while we kept losing.

However, he didn’t stop there, as he strongly implied Haslam also paid him (or at least offered) to lose games on purpose.

It’ll be interesting to see how many dominos continue to fall as the Flores lawsuit continues to unfold, but I have a feeling we’re not even close to being done.