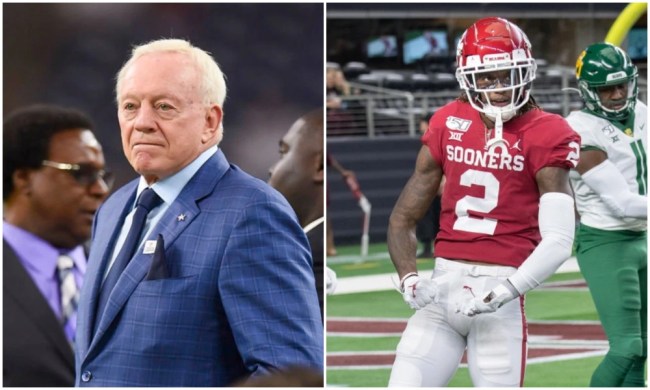 CeeDee Lamb has been a Dallas Cowboy four about 41 seconds and there is already some completely meaningless chatter surrounding him and what number he’s going to wear for the Cowboys.

The Cowboys’ first-round pick out of Oklahoma has already said that he wants to wear the No. 10 for Dallas, but apparently, that isn’t going to happen because in case you missed it, the Cowboys live in the past.

Moments after the draft concluded, Dallas owner and general manager Jerry Jones stated that he wants Lamb to wear the No. 88 jersey. Not only is it a historic jersey from a franchise perspective thanks to Michael Irvin, Dez Bryant, and others, but it was the same number one of Jones’ friends wore who recently passed away.

That’s fine, if your boss wants you to wear a number, you have to take that into consideration, but now Irvin has stepped into the discussion and things are getting out of hand.

It’s worth noting that the Cowboys have never officially retired one single number, but apparently, they needed Irvin’s permission for Lamb to wear the 88 jersey, which is, again, not the number Lamb even wanted to wear, but he’ll be rockin’ the No. 88 this season.

It’s completely understandable for Jones and Irvin to want to see Lamb wear the No. 88, but why can’t the new guy just wear the number he wants?

Sure, it’s historic, but Irvin last caught a pass in the NFL in 1999. CeeDee Lamb was BORN in 1999, my guy has no memory of Irvin wearing the No. 88 or even existing back then, but thank goodness Irvin gave him his approval.

Leave it to the Cowboys to always look in the rearview mirror even when it comes to something as simple as a jersey number.

I’m a big-time traditions guy, too, but this all just seems absurd. I know it’s slow out there in the sports world given the current situation the world finds itself in, but I’m willing to bet that Lamb wearing 10 wouldn’t have any effect on his play.