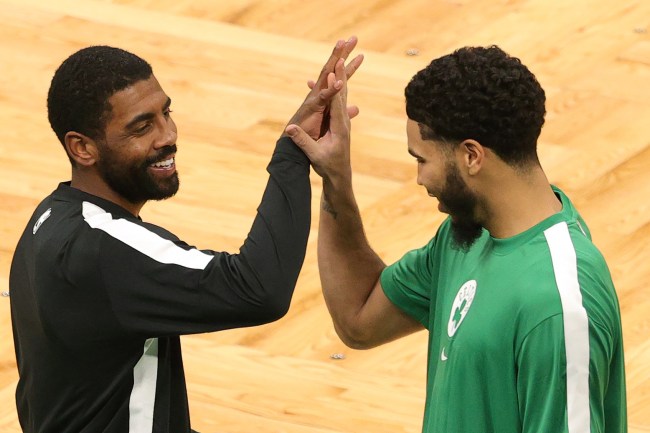 The Celtics are in such a bad place right now that the organization is longing for the return of a guy who acted like his two season stint with the franchise was court-mandated.

The projected Eastern Conference powerhouse sits at a dismal 15-17 (9th in East), has lost three straight bad games to teams .500 and below, and blows big leads with the ease of a Steph Curry free throw.

The Celtics' largest lead was 24 today.

If you had told Celtics fans in June of 2019 that a healthy Celtics team with the addition of Kemba Walker would be wholly unwatchable and they’d be longing for their star who never really wanted them, I’m sure many would want to swan dive into a tub of piping hot chowda. I know because I’m one of them.

Watching the Celtics every game pic.twitter.com/pvjx1IPJud

Celtics CEO and Governor, Wyc Grousbeck says Kyrie Irving's departure is one of the main reasons for Boston's struggles this year. pic.twitter.com/v2t9BmeZyt

“We had hoped Kyrie would stay forever and lead us all the way (to an NBA championship),” Grousbeck said on 98.5 The Sports Hub’s “Felger & Mazz” show. “He’s on maybe the best team in the league right now … And that change touched off a lot of stuff ’cause he left. We weren’t able to maybe recruit free agents in the same way and, you know, (it was) a bit of a domino effect. But it is what it is. We went for it with Kyrie. We had a good year with him. He tried hard, and then he moved on.”

No one expected Kemba to be the yin to Kyrie’s yang. All the voids in Kyrie’s contribution to the team were filled by Kemba, but unfortunately all Kyrie’s contributions are glaringly void. Kyrie was the pouty superstar who could get his shot off at will, Kemba is the bubbly star who’s had a bitchin’ time creating for himself as his teammates. What mindfuckery.

Now we Celtics fans must eat crow and hope that one of the three All-Stars in that locker room can un-super glue themselves from the passengers seat and take control of an identity-less team that is spiraling faster than you can say, “If you guys will have me back, I plan on re-signing here.”

I remember when Celtics fans told me that Kemba is better than Kyrie and were happy to see him leave.

Remember when Celtics fans thought kemba was an upgrade over Kyrie? Great times

Love how 2 years later Kyrie still lives rent free in that franchise. They not even .500 talking shit about him 😂😭😭

True but the man literally said he was resigning

Why do I let myself get wrapped up in sports while my marriage is falling apart? That’s above my paygrade.