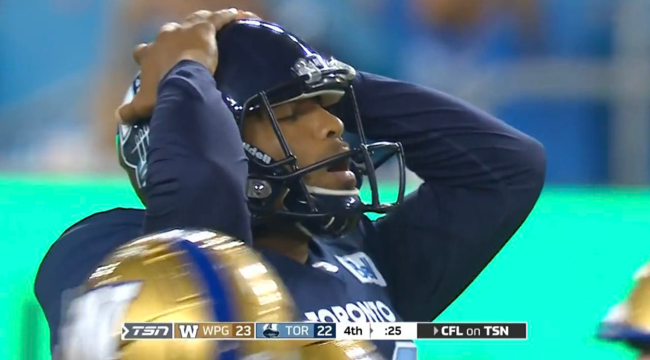 College football’s Week 0 is 53 days away. However, as the calendar continues to move to the fall, the pigskin is already being spun.

Just not in America.

North of the border, the Canadian Football League is in full-swing. Week 4 of the CFL season came to a close on Monday and it ended with a hilarious kicker moment.

In front of a home crowd, the Toronto Argonauts fell behind 17-3 to the Winnipeg Blue Bombers during the first half. It was not particularly promising and fans were calling for Chad Kelly to come in at quarterback.

Unfortunately for football fans across the globe, he did not. However, McLeod Bethel-Thompson put his first half woes behind him and finished 27-of-37 for 314 yards and two touchdowns and two interceptions.

Both of his touchdown passes came in the second half as Toronto clawed its way back into the game. In fact, the Argonauts had a chance to win— or, at the very least — tie.

After scoring a touchdown with less than 30 seconds left in the game, Toronto kicker Boris Bede took the field for the game-tying extra point.

Once it was clear (and it was clear right way) that he missed, Bede threw his hands on his head for an all-time ‘surrender cobra.’

Another Surrender Caribou* too! (*Canadian for Surrender Cobra) pic.twitter.com/SHL5H9lYEq

Winnipeg took over after the shank, ran out the clock, and won the game. Brutal.

To make the story even better, Toronto won a game in similar fashion earlier this year. What goes around comes around!