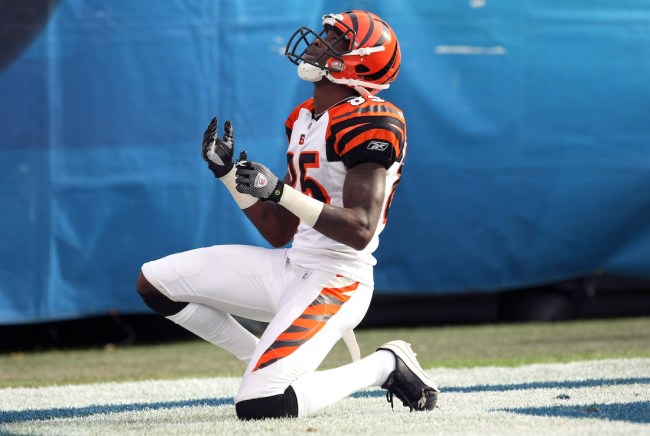 During his playing days, Chad Johnson was an absolute beast — and quite the character — helping redefine the wide receiver position during his era. Whether he was catching passes with the Cincinnati Bengals, New England Patriots, Miami Dolphins or even in the CFL at one point, Ochocinco always had a good time doing it — and he made sure to share that enthusiasm with everyone.

But catching a ball for a first down is way different from catching one for a touchdown. And when it came to unique touchdown celebrations once he did reach the end zone, nobody did it like Johnson.

Of all the Chad Johnson TD celebrations, though, was there one that he regrets never doing? The former wideout once revealed his favorite one, but there had to be one that he never had the chance to pull off, right? Indeed.

When asked that very question during an appearance on ESPN’s NFL Live, Johnson revealed a wild TD celebration that never came to fruition. Take a look below.

“I’m not sure if it was 2005 or 2006 and we were playing the Kansas City Chiefs, in Kansas City,” Johnson explained. “I’m not sure if people watching remember the “Easy Button” from the Staples commercials, and when you press it, it says ‘That was easy’… So I put one under the north and south end zone. I was hoping to score that game and pull out the Easy Button, run to Carson [Palmer] and have him hit that button. It’s very unfortunate that I didn’t get a chance to score that game.”

The king of celebrations, @ochocinco, talks about the one celebration he never got to do.

Who do you think should try it out this season? 🤔 pic.twitter.com/NwaBgdfKkd

Look, there were plenty of amazing Chad Johnson TD celebrations, so adding this “Easy Button” one to the list would’ve been cool. However, in the grand scheme of things, I’m not sure it would’ve been up there with the best ever. Think about the River Dance he performed in Chicago. Or the camera operating one he did at home. Or the Putting one he did once. Those were all memorable AF — and the one he describes above might have just been overlooked had it happened in that kind of mix back in the day.

However, because ESPN’s Laura Rutledge is a pro’s pro, she made sure to make a pretty solid suggestion: Maybe a current Cincinnati Bengals player could do the “Easy Button” TD celebration at some point next NFL season. Now that’s an idea!

It’s too bad we never got to see Chad Johnson do the celebration he recently described, but, hey, there were plenty of good ones that he gave us over the years, so he shouldn’t have too many regrets.