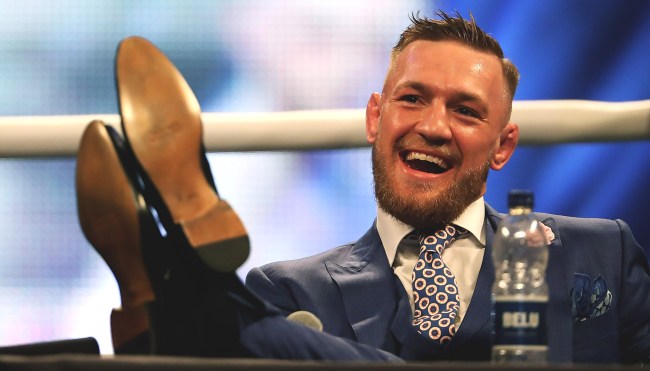 ESPN MMA analyst and former UFC mixed martial artist Chael Sonnen is concerned that Conor McGregor is going to get involved in the discussions surrounding a potential Tony Ferguson vs. Khabib Nurmagomedov fight if Ferguson wins his interim lightweight title fight against Justin Gaethje at the rescheduled UFC 249.

Current UFC lightweight champion Nurmagomedov and Ferguson have been scheduled to meet five different times inside the octagon only for all five bouts to be cancelled, the latest due to Khabib being stuck in Dagestan thanks to the ongoing pandemic.

Ferguson, who has already held one interim UFC lightweight championship belt, only to have it stripped from him due to injury, is on a UFC record 12 fight winning streak, while Khabib has also won 12 straight fights in the UFC and hasn’t lost a single time in his MMA career, going 28-0 with the UFC, ProFC, M-1, and other organziations.

So, if Ferguson defeats Gaethje on May 9th, one would have to assume he would finally get his fight with Khabib, right?

Chael Sonnen isn’t so sure. And the reason for that is one Conor McGregor.

In a recent interview on Submission Radio, Sonnen believes the UFC may be concerned about losing out on a potential McGregor-Khabib blockbuster rematch if Ferguson were to win at UFC 249 then defeat Nurmagomedov in the fall or winter.

“I know everything that’s been said is we’re going to keep Conor on ice and we’re gonna put him against Khabib, the winner of Khabib-Tony in September. But of course, that was believing that Khabib was going to win,” said Sonnen.

“You have to understand, if that is still the plan, then that means we’re getting ready to pull the screw job on Tony a second time. They have promised Tony an interim title fight for the second time. The first time he did it. He never lost it. And all of a sudden that belt is gone. We as fans cannot allow that to happen. If Tony comes out of this thing, Tony needs to be fighting Khabib. And if at some point they try to slide in Conor, which is likely, maybe not likely, but possible, that means we screwed Tony a second time. We can’t let that happen.”

Of course, all of that speculation will be for naught if Ferguson loses to Gaethe, who will have had several extra weeks to prepare for the fight after being a late substitute for Khabib when he was forced to bail.

Sonnen still thinks Ferguson will win, but now “instead of this being two rounds of fun, you’re now looking closer to four rounds of fun.”