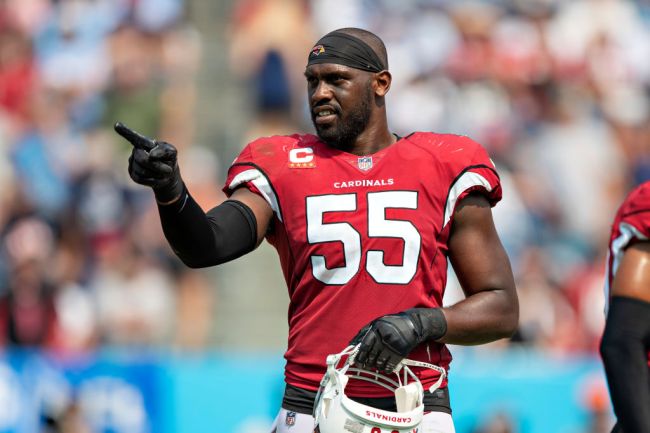 Arizona Cardinals pass rusher Chandler Jones registered five sacks in a dominant win over the Titans. He was the best defensive player on the field and only quarterback Kyler Murray might have had a better day.

During this week’s media session, the offensive MVP decided to take a shot at his defensive counterpart. The dual-threat quarterback claimed that Jones is an “unorthodox guy” who doesn’t look good without a shirt on.

In response, Jones fired back with a quip about Murray’s new haircut and his resemblance to the Mandalorian’s Baby Yoda.

Somebody tell baby yoda the truth about his new hairdo 🥴 https://t.co/4pJ6r0TFfs

Murray responded to the chirp with a trio of laughing emojis, laughing off the insult from his teammate and friend. Jones, on the other hand, wanted to let him know that it wasn’t a laughing matter.

I’m not laughing’ bro. Follow me back too! https://t.co/SFLgU2OYSe

While there are clearly some inside jokes being thrown around behind the scenes in Arizona, it all seems in good fun. And as long as the winning ways continue, it’s hard to imagine that either player will take offense to the playful jabs.

However, Jones is reportedly unhappy with his current deal and requested a trade during the offseason. It is unclear as to whether the Cardinals plan to deal their top pass rusher, but he is playing at such a dominant level that it’s hard to imagine them allowing him to take his talents elsewhere.