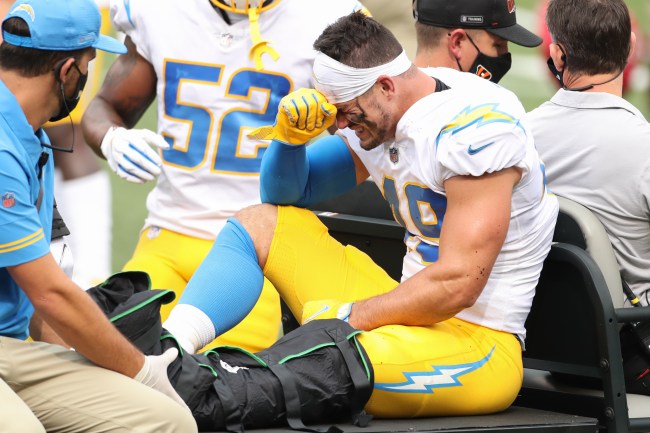 The Los Angeles Chargers have blown four consecutive leads of 16 points or greater and sit 2-5 on the season. Rookie quarterback Justin Herbert has flashed moments of greatness, but has experienced the growing pains of a first-year signal caller, and the backfield hasn’t fully recovered from the loss of Austin Eckler. However, even with the challenges offensively, fans of the organization are sick and tired of seeing their team lose in last-second fashion like it did to the Broncos on the final play of the game on Sunday. After the game, injured linebacker Drue Tranquill expressed his frustration on Twitter as well.

Insanity is doing the same thing over and over again and expecting different results.

To our fans, you deserve better. Giving up leads like this is absolutely unacceptable.

Stick with us, we will turn the tide.#BoltUp

There is the possibility that Tranquill is discussing his disappointment with the cycle of letdown, but all indicators point toward him ripping the coaching staff with his comments around insanity. Anthony Lynn is in his fourth-year as the head coach and has won only seven of his last 22 games and Tranquill was not the only one commenting on those in charge.

Anthony Lynn should be fired after this season.

Sure, if the team finishes the season on a run then he saves his job, but WHY should we expect them to go on a run? Obviously, they are incapable of keeping a lead and it STARTS with the head coach. This is inexcusable.

I hope Anthony Lynn finds himself a good RB Coach position next year.

I’ve said it so many times before and I’m gonna say it again.

Seriously, you guys, what does Anthony Lynn have to do to get fired?

Sunday’s loss was the largest blown season of the year and Denver out-scored Los Angeles 28-6 in the final 22 minutes to win. With the loss, the Chargers hold sole possession of last place in the AFC West. Tranquill started three games at linebacker in 2019 and recorded a tackle against the Bengals in Week 1. However, in that game, he suffered a broken fibula and was placed on the Injured Reserve list on Sept. 15.

Los Angeles will host the Raiders this weekend before facing the entire AFC East in consecutive weeks beginning in Week 10.