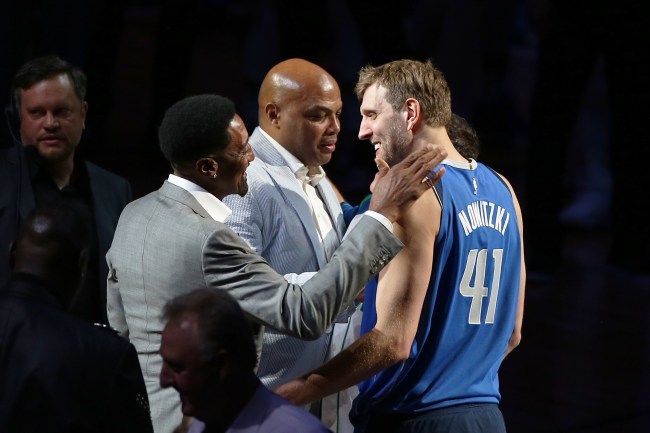 Charles Barkley is one of the greatest basketball players to ever live, and, during his playing days, Sir Charles played against some of the baddest men on the hardwood. Whether that was going head-to-head with Michael Jordan and Scottie Pippen during the 1993 NBA Finals, or just being one of the many superstars in the NBA during the ’90s, Barkley was an absolute machine on the basketball court.

As incredible as the “Round Mound of Rebound” was, he had a few moments where even he was amazed with other players. We saw that happen in a press conference following Game 3 of the ’93 Finals when Barkley was blown away at Jordan dropping 44 points on 43 shots to lead his Bulls to a victory. But, because Charles Barkley’s a hoops analyst, we’ve also gotten some A+ stories about other players who the Hall of Famer was impressed with — and Dirk Nowitzki was definitely one of those guys.

With Nowitzki’s 41st birthday June 19, Ball is Life tweeted out a tribute video showing how lethal the big German was on the basketball court. I mean, sheesh, the guy finished his career fifth on the all-time scoring list (since passed), led his Dallas Mavericks to a championship in 2010-11, won a league MVP and made it to 14 All-Star Games; so to say he was an assassin with a basketball in his hands would be an understatement.

While Dirk showed the world what he could do once he reached the NBA, Charles Barkley was apparently blown away with Nowitzki when he was still an unknown teenager. Tweeting an old video about his first impression of the Mavericks legend, Ball is Life showed Barkley describing the time an 18-year-old Dirk kicked the asses of him, Jordan and Pippen, with the kid dropping 52 on them during a game in 1997 — a year before Nowitzki was drafted. Take a look below at the video.

“Michael, Scottie and a bunch of guys… like NBA players. Dirk was like 18,” Barkley said, recollecting his memories from 1997. “So Dirk was kicking our ass. He got like 25 in half-time. And me and Michael like, ‘Scottie you gotta pick it up a little bit.’ He’s like ‘Man, I’m going to lock him down in the second half.’ Dirk finished with 52,” Barkley revealed.

“‘So I was like who the hell are you?’ And he starts talking, and he’s like 18-19. I said ‘Where you gonna play at?’ He says ‘ I have to go into the army.’ I said ‘ Dude you can’t go into the army playing like that.’” Here is what Charles did after learning Dirk had no college offers to help pave his way into the NBA.

“I called Nike and I said, ‘Find out about this kid, tell him I’ll give him everything he wants to go to Auburn!’” Charles Barkley badly wanted to get Dirk into his alma mater. However, Dirk never attended Auburn.

One would imagine it’d take a lot to blow the mind of Charles Barkley on the basketball court, but Dirk Nowitzki more than accomplished that, leaving such an impression that Barkley both called Nike and tried recruiting him to his alma mater, Auburn. Just goes to show how talented Dirk was even before he was in the Association.

It’s one thing to dominate B-level guys, but it’s a whole different level when it’s done to three Hall of Famers who were all members of the ’92 Dream Team — arguably the best basketball team ever assembled. But, hey, that’s how great Nowitzki was even as a teenager.